An old Bill Belichick cliche is that “football season doesn’t start until after Thanksgiving.” So what better time to separate the National Football League’s contenders from the pretenders.

Let’s look at the latest Super Bowl odds and go over the teams we’re feeling confident, and not so confident about, heading into Week 12. Click here if you have any doubts on how to bet on the NFL.

WHO CAN BEAT THE CHIEFS?

Now firmly in that rare Michael Jordan/Tiger Woods class of superstar athletes, Patrick Mahomes did what everyone watching Sunday Night Football expected of him, driving the Chiefs (+300) on a 75-yard touchdown drive in the final 1 minute, 15 seconds against the Raiders to pull out a 35-31 win.

Mahomes, now -125 chalk to win NFL MVP at Bovada, makes Kansas City the obvious favorite, but the Raiders have played them tough twice (winning once) and Andy’s Reid’s club almost lost last week to the Panthers as well.

Meanwhile, the Steelers (+500) are still perfect at 10-0 and will make the Chiefs travel to Heinz Field for the AFC Championship Game if they can stay a game ahead in the standings and secure the conference’s sole playoff bye.

Pittsburgh’s defense has allowed the third-fewest yards through the air and a league-low 54.8 completion percentage to opposing quarterbacks so they have as good a shot as anyone at slowing down Mahomes. The question is whether the Steelers can continue to get by without any semblance of a run game.

ROUNDING OUT THE TOP 5

While watching Tom Brady throw deep is reminiscent of Peyton Manning’s 2015 season, don’t expect the same storybook ending for the Buccaneers (+1000). Tampa Bay’s defense has fallen off a cliff, allowing 27.7 points per game over the past month.

Green Bay (+1200) should also not be taken seriously despite having a 7-3 record and a Hall-of-Fame quarterback. However, if you like the Packers, it’s best to bet on them now as they have a ridiculously soft six-game stretch to close the season.

New Orleans (+700) is an intriguing bet as it’s possible they’re a better team with Taysom Hill than Drew Brees. While that sounds like an overreaction to the gadget guy’s impressive debut as a starter (233 passing yards, 51 yards, and 2 TDs on the ground against the Falcons), Hill is no doubt harder for defenses to prepare for.

Look for the Saints to win their next three, setting up a must-see contest with the Chiefs in Week 15. 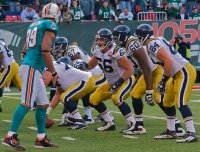 With three games against the NFC East and another against the Jets, the Seahawks (+1200) are about to go on a run so buy now if you’re a believer.

Seattle’s run game will get better with a healthy Chris Carson and their defense has shown serious signs of life over the past two weeks with new acquisition Carlos Dunlap at defensive end and a healthy Jamal Adams back in the secondary. Oh yeah – and Russell Wilson might be the only guy in Mahomes’ stratosphere.

Russell Wilson has the NFL record for most wins by a QB through first:

Last week, we recommended the Rams at +900 to be crowned NFC Champions and correctly predicted they would have no trouble with the Bucs on Monday Night Football.

While it’s hard to trust Jared Goff, Los Angeles (+1200) is out-gaining their opponents by about 100 yards per game thanks to Sean McVay’s scheming and they have two of the best defensive players in the NFL in Aaron Donald and Jalen Ramsey.