The final game of NFL Super Wild Card Weekend bodes to be the most unpredictable as the Cardinals head to SoFi Stadium in Los Angeles on Monday night.

Arizona started a desert-hot 7-0 before finishing the season 4-6 with ugly losses against Carolina, Detroit and Seattle (with the division title on the line), while the Rams won the NFC West despite blowing a 17-0 lead over the 49ers in Week 18.

Which of these up-and-down clubs can you trust in the postseason? Let’s examine the latest game odds and be sure to check out the top betting sites for NFL football in 2021, as well as tips for NFL Playoffs odds.

Stafford in the spotlight

Matthew Stafford tossed 4,886 passing yards and 41 touchdowns in his first year in Hollywood, but his 17 interceptions tied rookie Trevor Lawrence for the most in the NFL. He also committed at least two turnovers in six games this season.

To prove himself as a big game quarterback and rid himself of the losing stink that developed after years in Detroit, Stafford no doubt will continue to feed triple crown winner Cooper Kupp, who led the league in receptions (145), yards (1,947) and touchdowns (16). Sean McVay could also opt to feed running back Sony Michel, given that Arizona allowed 100+ rushing yards in three of its final four games.

While Stafford is 0-3 in the playoffs all-time, his opponent Kyler Murray will be making his postseason debut. He and the Cards cruised to a 37-20 victory at SoFi in Week 4, but the diminutive QB couldn’t escape the clutches of Aaron Donald in Week 14. The three-time Defensive Player of the Year had three sacks and 14 pressures in the 30-23 win.

With star receiver DeAndre Hopkins still out with a knee injury, Murray will have to be at his electrifying, creative best on Monday night. The good news is he should have James Conner and Chase Edmonds back in uniform, and possibly Hall-of-Fame defensive end J.J. Watt, who could make an improbable return from a “season-ending” shoulder injury.

Cardinals to win outright (+165 moneyline). Arizona certainly doesn’t inspire faith, with losses in four of their final five games, but they do have a better record against playoff teams this season (5-2) than the Rams (2-5). Inexplicably, Arizona has also enjoyed an 8-1 record on the road, compared to a 3-5 mark at home.

While Los Angeles won five of its final six games to capture the division title, Stafford has been incredibly shaky down the stretch, throwing four pick-sixes since Week 9.

Kyler Murray is the first player in NFL history to have 70+ passing TD and 20+ rushing TD in his first three seasons. pic.twitter.com/JHSsh8n3aT

Bet the OVER on 49.5 points. Both of the prior meetings between these two clubs went over the expected point total and, unlike other playoff matchups this weekend, weather won’t be a factor in lovely Los Angeles. Stafford should light it up against the Cardinals’ burnable secondary and Kyler will use his one-of-a-kind illusiveness to escape pressure and score a last-drive upset over the Rams. 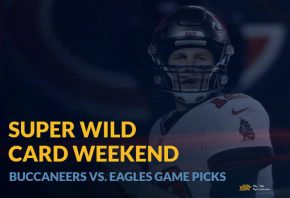