In a game where different styles face each other, the New Jersey Devils and the defending NHL Champion Boston Bruins clash this Thursday night at the TD Garden at 7 PM ET. 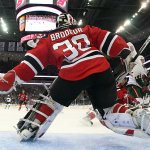 Jersey needs to recover fast if they want to hold a playoffs spot; the Devils have lost three in a row, and have lost several spots in the Eastern conference standings. Their last defeat was a 2-0 score against the NY Rangers; they lost also against Tampa Bay and  Vancouver  in that stretch.

“We have to keep going the same way,” said tough-luck loser Martin Brodeur, who made 13 saves. “We’re doing a lot of good things. It’s just not going our way right now. When we were winning, we played games we didn’t deserve to win. We just have to work hard.”

Boston is second in the standings, and they just split two games “series” against Ottawa. The Bruins will start a stretch where they will face all New York teams, staring with the Devils, then the Islanders and finishing with the Rangers.

“The first two periods were really painful to watch and see,” Boston coach Claude Juilen said about his team losing 1-0 against the Senators. “You need your goalie to be good on these types of nights to give you a chance. He was good and gave us a chance.”

Boston is the second best scoring team in the NHL, just behind the Philadelphia Flyers; there is no way the Devils offense can matchup with them.

My pick: Take Boston by at least two goals.