The Washington Capitals look to sneak into the NHL playoffs in the last run of the regular season, and a victory against the current champions Bruins, in Boston, could be an unexpected help for them. The Capitals take on the Bruins this Thursday at the TD Garden, at 7 PM ET. 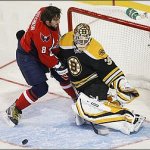 The betting odds have the Bruins listed as 190-moneyline favorites, and the game’s total is 5½. The Capitals lost 5-1 against Buffalo (their direct opponent for the last spot in the playoffs) on Tuesday, and a win over the Bruins seems more as a dream than a reality.

“We got to do whatever it takes to win hockey games right now,” Washington center Matt Hendricks added. “We know what’s on the line, we know where we sit in the standings, and it’s going to be a desperate hockey team”.

Boston won their last game with a 5-2 result against the Lightning on Tuesday; they have won three in a row and five of the last six matches. Keep in mind, the game total has gone UNDER in 18 of last 25 games when the Bruins face Washington.

Take Boston in the moneyline and the under in the game total.