The 2012-13 NHL season could in serious danger now as the league cancelled the rest of the preseason, just a day before negotiations were set to continue in an effort to end the lockout. 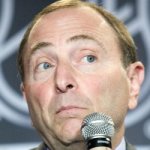 The regular season is supposed to begin Oct. 11th, but things don’t look good as all the preseason games scheduled in September were cancelled.

“I’ll reserve judgment on my sense of ‘optimism’ (or not) until we see how our meetings unfold,” NHL deputy commissioner Bill Daly said in an email to The Associated Press. “Ultimately, we have to meet and talk to make a deal. But until we make progress and see some compromise from the Union of their economic position, we won’t be going anywhere fast.

NHL owners locked out the players around September 16th when the last collective bargaining agreement expired.

The NHL and the union met for the last time in formal negotiations on September 12th, but reports mentioned there wasn’t good news to tell.

“Obviously, we’ve got to talk before you can get a deal, so I think it’s important to get the talks going again,” Daly said this week. “But you also have to have something to say. I think it’s fair to say we feel like we need to hear from the players’ association in a meaningful way because I don’t think that they’ve really moved off their initial proposal, which was made more than a month ago now”.