The best team in the NHL right now, the New York Rangers, visit one of the most dangerous teams in the
Eastern conference, the Philadelphia Flyers, at Wells Fargo Center at 1 PM ET. 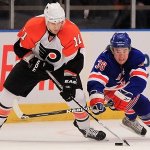 The Rangers beat the Tampa Bay Lightning last Thursday 4-3 at Madison Square Garden; New York
showed some resilience and mental toughness as they entered the third period down one score. “It’s
like other good teams that I’ve been on. There’s never a panic in the locker room,” Rangers Brad
Richards said. “We’ve been through it, and we’ve got a game plan. We’ve executed many times and
we’re very confident.”

The Flyers are fourth in the East, and arrive to this game after a 4-3 victory over the Toronto Maple Leafs
on Thursday as well. “We were cycling, we had the confidence going and we had some chances,” Flyers
Scott Hartnell said. “We work well together.”

Philadelphia outshouted Toronto by more than 10 attempts, but they have shown lately they are not
producing as they should in front of the net. Before the win over the Maple Leafs the Flyers had lost
three in a row; all of the against division rivals (Devils, Rangers, Islanders).

The Flyers and the Rangers have faced each other four times this season; all of them have finished with
a New York win, including the 5-2 beating on February 5th at MSG.