The New York Rangers will seek revenge when they play the Philadelphia Flyers, this Tuesday at 7 PM ET at Madison Square Garden, in what is the second meeting between these two this season. 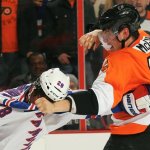 The Flyers beat the Rangers 2-1 in the first game.

New York beat Toronto 5-2 on Saturday and looked really good in the process. “We knew if we were going to play like this, it’s going to turn around,” Rangers Marian Gaborik said. “Even though after the second period we were down, you could see the confidence in this room that we felt good about ourselves.”

“I’m glad we won, I’m glad the way we won also that we didn’t lose our composure … do we have all the answers, are we all set? No,” coach John Tortorella said. “We’re still going to have to continue to work at our game.”

Philadelphia beat the Rangers and the Florida Panthers in back to back games, but they were dismantled by the Lightning on Sunday.

“We can’t use that as an excuse,” forward Matt Read told the team’s official website. “Everyone’s playing a lot of games in a short amount of time. When you’re playing back to back, you’ve got to keep it simple and play smart hockey. We’ve got to learn how to play both nights and come to play for 60 minutes every game, every night.”

The Rangers have won eight of the last nine games in the series against the Flyers, just before losing to them this season.