After the Vancouver Canucks lost Game 7 of the Stanley Cup Finals at home to the Boston Bruins, one would expect their wagering stock to plummet and their value to increase.

Well that doesn’t seem to be the case in the off season, and Vancouver remains the current Stanley Cup winning odds on favorite for the 2011 – 2012 NHL Hockey season… 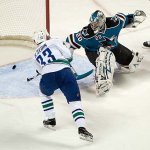 Surprisingly, the team that sent them packing and walked away with Lord Stanley’s Cup is an extremely valuable +1000 to repeat. Both Pittsburgh and Philly have better odds at +700 than Boston, with the Washington Capitals rounding out the top four teams at +750.

All still ranked higher in odds than the defending Champs.

Boston managed to maintain stellar betting value throughout the last post season, and for whatever reason that has translated to this off-season. Betting these futures is about finding the value in the contenders and getting a good line early.

Boston has the most value on the board considering they are the defending champs.

Finding the top team from the previous season in any sport outside of the top three is a great futures bet, setting aside the risk of injuries and trades heading into the season, the Bruins are a phenomenal long term wager…for now.

Here are the rest of the top ten sportsbook Stanley Cup Futures Odds for the upcoming NHL Season: