The Los Angeles Kings are a completely different team inside their arena, and they showed it on Tuesday night. Game four of the Western Conference finals will be this Thursday at 9 PM ET at Staples Center. 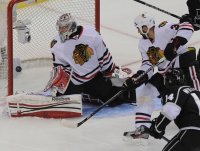 Game three ended with a 3-1 victory by the Kings. This is kind of what I expected this to be when we did it last year,” captain Dustin Brown said. “Last year, we were playing at a level few teams ever play at. This year, it’s taking that extra effort out of us, and we’re coming up with it.”

“It’s not something we wanted to try and test out, so it was certainly a must-win in our situation,” Kings defenseman Rob Scuderi said. “We were just able to be aggressive instead of sitting back and letting them dictate the pace this time. That’s what we have to do to compete with those guys.”

The Blackhawks matched their playoff low with 20 shots in game three; the game was played by the Kings Terms and conditions. “They play a lot better at home,” Corey Crawford said. “They were buzzing. They were running around a little bit more than in Chicago, but we were ready for that. We knew they would come harder. We were almost there. We almost tied it.”

The Chicago Blackhawks are listed -105 in the moneyline, and the Los Angeles Kings -115 to win game four. The series is currently 2-1 as Chicago leads over the NHL champions.