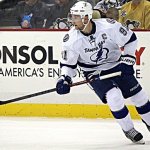 Montreal and Tampa are first and second, respectively, in the Atlantic Division, but both trail the Rangers for top spot in the Eastern Conference.

Montreal is 5-3-2 in its last ten. Goalie Cary Price – arguably the Vezina front-runner – had been suffering one of his worst stretches of the season, but bounced back last game, stopping 35 shots en route to a 3-1 win over the New York Islanders.

The Canadiens’ leading scorer, Max Pacioretty, potted the eventual game-winner – his 34th goal of the season – three minutes into the second period while the Habs were shorthanded.

Tampa Bay, meanwhile, has posted a 6-3-1 record in their last ten games, but they dropped their most recent game, 2-1, on Saturday against the Winnipeg Jets.

Tampa Bay coach Jon Cooper was thoroughly dissatisfied with his team’s effort on the weekend.

“The result was justified,” said Cooper. “We didn’t match their intensity.”

Tampa Bay managed only 16 shots on net in the entire game, including just one shot on three power play chances. Leading scorer Steven Stamkos has scored just one goal in his last five games.

Tampa has dominated Montreal this season, though, taking all three meetings so far (7-1, 4-2 and 1-0 OT). The 1-0 OT win came just five days ago in Montreal. Despite needing OT to get the two points, the Lightning thoroughly outplayed the Canadiens, outshooting them 36-19.

Tampa comes into tomorrow’s game as decent sized favorites, sitting at -130 in the moneyline versus +120 for the Habs.