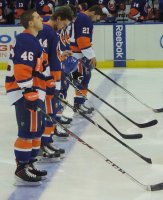 The Boston Bruins (38-23-8, 84 pts) are first in the Atlantic, but sit just one point up on Tampa Bay and Florida in the hotly contested division. This afternoon, (1:00 PM Eastern), the Bruins welcome the New York Islanders (37-20-8, 82 pts) to TD Garden as both squads look to solidify their playoff seeding entering the final stretch of the season.

The Bruins would have a more comfortable lead atop the division if they were better on home ice. The team is under .500 at TD Garden (15-16-5), but have made up for that with the best road-record in the league. The recent quartet of OT games have been a microcosm of their season, with both wins coming on the road and both losses coming at home.

Leading scorer Brad Marchand has continued his march to a career year of late with six points in his last five games. The diminutive forward is now among the favorites to earn one of the final roster spots on Team Canada for this summer’s World Cup of Hockey.

The Islanders’ biggest gun, John Tavares, has already secured a spot on that roster. He isn’t quite on pace to match his numbers from last year, when he averaged just over a point per game, but his 25 goals and 53 points are both team highs. He enters tonight with points in three straight and goals in back-to-back games.

His tally against the Leafs last time out wasn’t enough, though, as the Isles let a valuable point slip away against the worst team in the NHL (4-3 SO). The setback ended a four-game win streak.

The Islanders have no hope of catching league-leading Washington, sitting 21 points back, but they’re in a dogfight with the Rangers for the second spot in the Metropolitan Division. The Rangers have a two-point edge at the moment, but the Isles have two games in hand. The teams appear destined to meet in the first round of the playoffs, with home-ice the lone factor to be decided.

Unfortunately for Tavares and company, the trends look to favor Boston in today’s game. The Bruins won the first two meetings of the year, stretching their head-to-head win streak to four. True, they haven’t been great on home-ice this year, but that’s an anomaly that’s likely to correct itself.