The Pittsburgh Penguins look to stay on top at the Metropolitan division when they host the Washington Capitals, this Wednesday at 8 PM ET at CONSOL Energy Center. 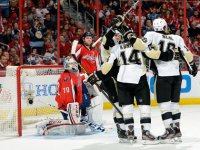 The Penguins have won four on the last five games; they have a 16 point lead over the Capitals in the division standings and they would like to increase it.

Pittsburgh blew a 2-0 lead against Edmonton on Friday Night; they managed to win on Saturday against the Flames

“After a disappointing third period for us last at Edmonton, for us it was a much better team game,” Penguins defenseman Matt Niskanen said. “We got the 2-0 lead, same situation we were in last night, and that’s something we want to get better at, playing with the lead.”

Mason Crosby leads the NHL with 67 points, but he didn’t have one against the Flames in a game where ended in a low scoring affair.

“It was just nice to have a close, low-scoring game,” said goalie Marc-Andre Fleury, who has a 1.29 goals-against average in his last seven starts against the Capitals. “It felt nice. The last few games were a little crazy, so it’s definitely nice, and it was a good battle.”

Washington enters this game with two losses in a row against Buffalo and San Jose, and with eight defeats in their last 11 games.

The NHL moneyline have the Penguins as favorites listed -200; meanwhile the Capitals are +181.  The point total is set at 5.5.