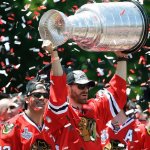 The NHL’s regular season wrapped up this past weekend, and it closed with a bang. The defending Cup champs from Los Angeles were kept out of the playoffs by the plucky Calgary Flames, while Ottawa put the finishing touches on its epic postseason push by edging out the Bruins in the Eastern Conference Wild Card race.

Heading into the second season – and eventually the off-season – casual fans and pundits alike are struggling to find clear favorites for the Stanley Cup and many of the end-of-year awards.

Thankfully, in this time of ubiquitous incertitude, we have Connor McDavid holding the fort at the top of the 2015 NHL Draft board.

Let’s take a look at the odds for all the NHL action that awaits in the coming weeks and months.

As mentioned, it’s very difficult to find a clear favorite in this year’s playoffs. The Rangers took the President’s Trophy with 113 points, but it’s been four years since an Eastern Conference team hoisted the trophy and the West looks stronger again this year. That said, emerging from the cannibalistic Western Conference will be a tall order; the Blackhawks, Ducks, Blues, Wild, and Predators are sure to take their toll on each other before the finals even start.

Handicapping the Conn Smythe race is mostly about finding the likely Stanley Cup winners. For almost every team, we could make a solid case as to why they’re a real cup contender. (I said almost. Sorry Flames and Jets.) That said, the Rangers, Blackhawks, and Ducks are the top dogs, so the list is replete with their top dogs, in turn.

Hart Trophy odds (regular season MVP):
This could be a very close race between the top-four, but we see Price as the favorite. Carey backstopped the Canadiens to the best goals-against during the regular season (2.2) even though Montreal gave up over 30 shots per night.

Ovechkin’s 53 goals (11 more than his nearest competitor) are impressive – and his scoring surge coincided with the Caps making their playoff push, making his contributions look all the more valuable – but linemate Nick Backstrom’s NHL-leading 60 assists will lead voters to favor Price’s one-man show.

Go look at the Calgary roster. Now go look at their record. That’s impressive enough as it is. Then consider the fact that they played the last 20 games of the year without their (up-to-that-point) MVP, Marc Giordano. Hartley deserves this award.

Like the Hart, this should be another tight race. All four of the top contenders have a real shot. Ekblad was the best defenseman – make that best player – on a Panthers team that nearly defied the odds and made the playoffs. (He also posted a +12 rating on a team that gave up 17 more goals that it scored.)

Gaudreau was frequently the best player on a Calgary squad that did defy the odds and make the playoffs.

Stone tied Gaudreau for the rookie scoring lead and was crucial to Ottawa’s late-season playoff surge.

And Klingberg? He only posted more points than Ekblad from the blueline in 16 fewer games while averaging more time-on-ice.

The ironic part? This trophy was Forsberg’s to lose at the midway point of the year. But the young Swede really cooled off in the second half, much like the rest of his team.

Unless something horrible happens to McDavid in the OHL playoffs (perish the thought, knock-on-wood, etcetera), he’s going to be the first pick. Eichel, another once-in-a-generation talent, had the bad luck of being born at the same time as the next “next one”. Eichel probably would have been the first overall pick in any draft class dating back to Crosby in 2005.

Odds to be the next coach fired in offseason (after Toronto’s Peter Horacheck):

The Flyers and Sharks both underperformed this season. McLellan was rumored to be out as early as last offseason after San Jose blew a 3-0 series lead to the eventual Cup winners, Los Angeles. Berube, meanwhile, has been unable to crack the playoffs in two straight years despite having a roster laden with talented veterans and some solid youngsters.