What better place to start than taking a peek at the Maple Leafs’ Stanley Cup odds! The Maple Leafs have struggled to make it past the first round in recent years, and their last Stanley Cup win was back in 1967. Still, they are one of the annual favorites and always appear near the top of the betting odds list due to the talented players they’ve historically had on the roster.

Leafs haven’t won a cup in decades, but it doesn’t mean that the fans in Toronto haven’t been able to enjoy great players. An incredible 75 inductees into the Hockey Hall of Fame have ties to the Maple Leafs, including 62 former players and 13 builders. Forwards Mats Sundin, Wendel Clark, Dave Keon, Doug Gilmour, and Darryl Sittle headline the class (though Clark would also play defense), along with blueliners Börje Salming, Pierre Pilote, and Tim Horton, and goaltenders Walter “Turk” Broda, Johnny Bower, and Ed Belfour (Belfour, however, spent more time with the Chicago Blackhawks and Dallas Stars). 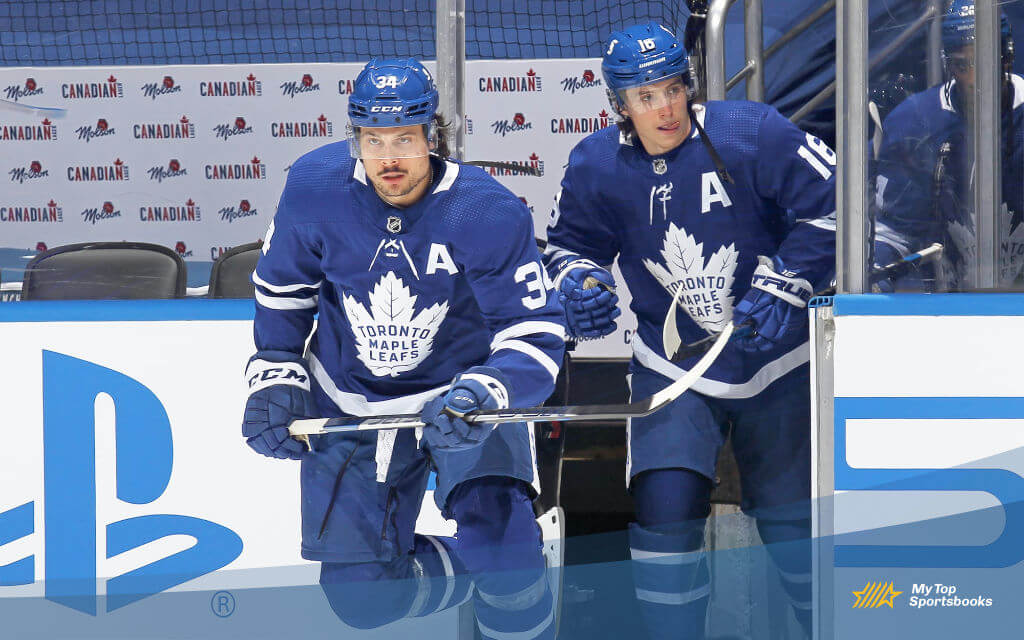 Whether you’re looking for the Maple Leafs’ odds to win a single game, a player prop bet, or a Stanley Cup futures bet, never fear – we’ve got you covered! There are more ways to bet on the Maple Leafs than you can shake a stick at. While it may seem intimidating at first, reading Maple Leafs betting lines will become natural in no time.

We’ll start with the bet that takes place over the longest time period, the Stanley Cup futures bet. When looking at the Maple Leafs’ Stanley Cup odds, you may see a number next to the line that reads, for example, “+ 400.” In that example, a $100 bet on the Maple Leafs would win $400 if Toronto won the Stanley Cup, resulting in a $500 total payout. The higher the number after the “+” sign is, the less likely it is that the Leafs will win the Cup.

If the Maple Leafs are particularly good and Toronto becomes the favorite to win the Stanley Cup, the symbol next to the betting number may switch from “+” to “-.” For example, the future betting odds may read “Toronto Maple Leafs -175.” In that case, a bettor would need to wager at least $175 to win $100 on their payout.

The higher the number is, the more money is involved. You’ll just need to remember to watch the signs. A “+” sign means potential for a bigger win, and the “-” sign means you’ll need to invest more money up front if you want to score a nice payday.

Odds lines are similar for player prop bets. Prop bets involve betting things like if a player will score a goal, which team or player will score first if a goaltender records a shutout, and much more. Those odds are listed the same way.

For that example, a line might read “Auston Matthews (anytime): +175.” If Matthews scores a goal at any point (other than in the shootout), a $100 bet will win $175 and payout $275. It is incredibly rare to see a player with a “-” symbol in front of their odds to score unless it is some sort of special event (such as the All-Star Game), but if you do see this symbol in front of a player prop bet, you should probably avoid it, as there isn’t nearly the same potential to win big.

In the same way, betting on a single game (usually called “moneyline” betting) will feature the “+” and “-” symbols. In a head-to-head matchup, a “-” symbol will almost always denote the favorite, but in some rare cases where the teams are evenly matched, it’s possible both teams have a “-” symbol. In that case, the team with the higher number is the favorite and is expected to win.

One more advanced type of Toronto Maple Leafs betting is on the puck line. Betting on the puck line is similar to betting against the spread in football, wherein you are predicting the margin of victory. While puck line betting, you will see “-1.5” next to the favorite and “+1.5” next to the underdog. Because betting on the underdog includes spotting them 1.5 goals (the .5 acts as a tiebreaker), the odds there usually have a lower payout.

A sample betting line might read: “Toronto Maple Leafs -1.5 goals: +225.” For a win here, the Leafs would need to win by at least two goals in order to earn a payout. Betting the puck line is often a good way to make a bet on the favorite when the odds aren’t good enough on the moneyline. 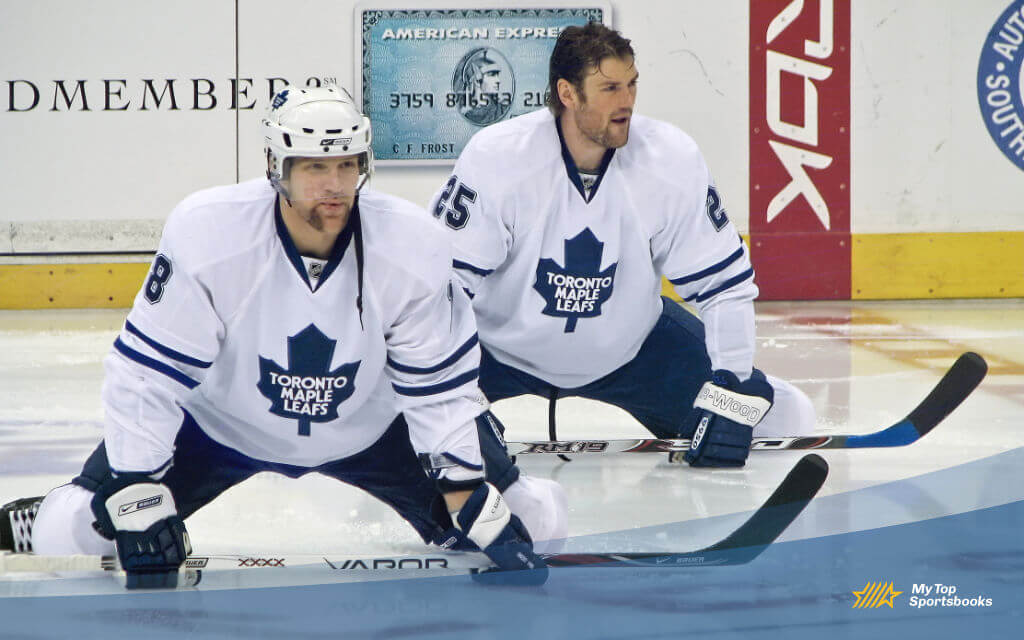 Where do the Maple Leafs play their home games?

Toronto plays its home games at Scotiabank Arena. They used to play at Maple Leaf Gardens, though the Leafs stopped playing there in 1999.

Are the Toronto Maple Leafs cursed?

If you’re someone who believes in sports curses, jinxes, or hexes, it certainly looks like the Maple Leafs may be dealing with some sort of supernatural interference. For some reason, especially in recent history, talented Maple Leafs teams have fallen apart in the playoffs.

One such example came in the 2013 playoffs against their longtime rival, the Boston Bruins. Playing in Game 7 of the Eastern Conference Quarterfinals, the Maple Leafs had a 4-1 lead in the third period while on the road. Nathan Horton scored for the Bruins to cut the lead to 4-2 nearly halfway through the third, then Milan Lucic and Patrice Bergeron each scored in the final two minutes to tie the game 4-4. Bergeron scored six minutes into overtime, eliminating the Maple Leafs.

Toronto saw another playoff choke against the Montreal Canadiens in the 2021 postseason. After winning the Covid-19 necessitated North Division, many penciled the Maple Leafs in as the playoff champion as well. Leading 3-1 in the series, Toronto lost three straight to close out the series (including losing Games 5 and 7 at home), and the Canadiens used the comeback to advance all the way to the Stanley Cup Finals. Toronto is one of three NHL teams that has not won a series since the 2004-05 lockout; the others are the Florida Panthers and the league’s newest team, the Seattle Kraken.

However, the most memorable Leafs moment came in 2020. Emergency backup goaltender David Ayres, a 42-year-old Zamboni driver who worked for the Maple Leafs, was pressed into service for the Carolina Hurricanes, the first and so far the only game of his NHL career.

Ayres played just over 28 minutes and stopped 8-of-10 shots, leading the Hurricanes to a 6-3 win over Toronto. In doing so, he became the first emergency backup goaltender to win an NHL game.

You read that correctly: the Leafs lost to a 42-year-old Zamboni driver who works for them.

So is it a curse? We’ll leave that for you to decide…

Is it easy to bet on Toronto Maple Leafs?

Yes, it is very easy to bet on any NHL match. All of our top sportsbooks offer odds for each and every Toronto Maple Leafs game.

Who has the best Toronto Maple Leafs Odds?

I would start your research from Bovada and then also check BetOnline and GTBets.

Are the Maple Leafs an “Original Six” team?

Who is the Maple Leafs’ all-time leading scorer?

Have the Maple Leafs won any Stanley Cups?

Which Maple Leafs players have had their jersey numbers retired by the team?

What's the best place to bet on Toronto Maple Leafs?

BetOnline and Bovada are my favorite bookies to bet on Toronto Maple Leafs matches.