Joe Biden has been on the job less than two weeks, but oddsmakers are already speculating on who could replace the 46th president of the United States. Interestingly enough, Vice President Kamala Harris is a narrow +400 favorite to win the 2024 election over Biden (+500).

Let’s check the latest odds and evaluate a few of the names who could run for the world’s highest office.

Why is Kamala Harris (+400) the favorite? Well, at 78, Joe Biden (+500) became the oldest president ever to enter office when he was inaugurated on January 20. So, it’s only natural to think he may, well… die, or step down in the next four years, especially since he himself described his role as “transitional” for the future of the Democratic party.

Still, old white men tend to want to hold on to power as long as possible. And, according to his physicians, Sleepy Joe exercises five days a week and does not smoke or drink alcohol (or eat copious amounts of fast-food like his predecessor).

It’s been less than two weeks since President Biden took office, but he has wasted no time taking historic action and delivering on his promises to the American people. pic.twitter.com/aQjGzFWQ1z

There are other interesting names on the Democratic side, including Stacey Abrams (+1200), Alexandria Ocasio-Cortez (+1600), and Michelle Obama (+2500), but as impressive as all three of these women are, their path to power would be hard to navigate in a mere four years.

When a one-term president is booted from office, the new guy tends to stick around for the full eight years. This happened when Democrat Bill Clinton jettisoned George Bush Sr. from office in 1992 and when Republican/Hollywood actor Ronald Reagan replaced Jimmy Carter in 1980.

That said, can political history actually be instructive in a country that elected a pussy-grabbing, toupee-wearing, second-rate reality TV star as its president four years ago? Probably not.

Mercifully, Bovada didn’t even list Donald Trump on their board but BetOnline has the riot inciter at +3300 to reclaim office, as well as his coke-snorting son Donnie Jr. at +4000. Let’s just hope Vladimir Putin doesn’t lay a few Rubles on Trump Sr. at +3300 or we could all be in trouble again.

Mike Pence (+600) has the shortest odds of any potential Republican challenger, which is bad news for both women who want to maintain control of their own bodies and women who like to go on dinner dates.

Former U.N. ambassador Nikki Haley (+1400) is next on the list, and considering the deprived state of the Republican party, it wouldn’t be shocking to see Trump’s No. 1 cheerleader throw her name in the mix at some point over the next four years. 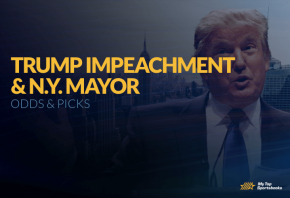