The 2018-19 English Premier League is just over a week away!

Manchester City are the ones the beat. The other regulars — Man United, Liverpool, Chelsea, Arsenal, Tottenham — are, as always, among the favorites. And Wolverhampton Wanderers, Cardiff City and Fulham join the English top flight after a successful 2017-18 season in the Championship.

Are you ready to pick a winner? Here are the pre-season odds.

After the greatest season in English Premier League history, Manchester City return as the overwhelming favorites for the 2018-19 season. No surprises there. Pep Guardiola has constructed a side that should dominate England for years to come.

Man City could have left their 2017-18 roster unchanged and they would still be the strongest Premier League side by a wide margin. But they decided to sign Leicester’s Riyad Mahrez just for good measure. The Algerian international is one of the most creative midfielders around and seems tailor-made for Guardiola. The best team in the league just got a little better.

Signing a new keeper was the first order of business for 2018-19. We all feel for Loris Karius, but the man had to go. Klopp coughed up £56 million for Roma’s Alisson, which is maybe more than he’s worth but that’s just how the transfer market is these days.

Liverpool already have one of the best attacking trios in the world; it’s their defense that lets them down. So it makes sense that Klopp is zeroing in on defensive midfielders. AS Monaco’s Fabinho and RB Leipzig’s Naby Keïta should be great additions to the club. 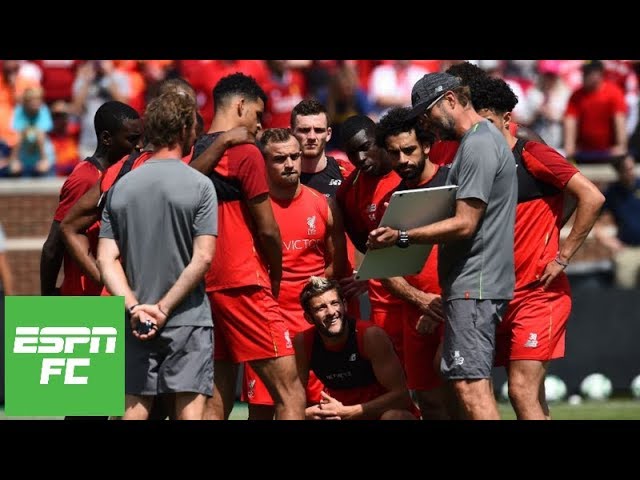 Jose Mourinho is feuding with the board again. The Man United manager wants to make a few big ticket signings before the season starts, but increasingly it looks like he’ll come up empty-handed. So far, the “Special One” has only managed to sign Shakhtar Donetsk’s Fred and 19-year-old Porto defender Diogo Dalot. He risks losing Paul Pogba to Juventus and Anthony Martial is ready to leave (if anyone will take him).

Man United finished last season in second place, 19 points short of their neighbors. They have a handful of world-class players who have struggled to find their form at United. Players like Romelu Lukaku, Paul Pogba, and Alexis Sánchez could do wonders for the club if they find their footing. There’s always hope for the Red Devils.

These are uncertain times for Chelsea. They’ve sacked another manager, they’re at risk of losing their star players, and their Russian oligarch owner is currently struggling to obtain a UK visa.

Chelsea managers have a notoriously short shelf-life. Anyone taking the job knows that they only have a few seasons with the club. That creates some perverse incentives. Why make long-term decisions when you won’t be around to reap the rewards? It’s only a matter of time before Chelsea’s short-sightedness catches up with them.

Maurizio Sarri is an amazing manager, but the deck is stacked against him. There’s a good chance Real Madrid will poach Eden Hazard and Willian, robbing Chelsea of two essential players. And with all the turmoil surrounding Abramovich, it’s unlikely that Sarri will get the financial backing he needs.

As expected, Spurs are having an eerily uneventful transfer period. But here’s the good news: it doesn’t seem like they’ll lose any players this season. Harry Kane signed a new contract, Dele Alli seems to be staying put, and the rumors of Christian Eriksen to Madrid are simmering down.

It’s the same old Tottenham. A solid roster but nothing spectacular. Spurs have finished fifth, third, second, and third in their last four seasons under Mauricio Pochettino. They’re always near the top, challenging the big four and posing a threat to any team they face. But they’ve never managed to take it one step further.

It’s a new beginning for Arsenal. After 22 years of Arsène Wenger, the Gunners are finally ready to move on. Unai Emery takes over at the helm, and he’s wasted no time in shaking up the club. He cut Santi Cazorla loose and sold local boy Jack Wilshere to West Ham. He signed a promising young defensive midfielder in Lucas Torreira, and a battle-tested defender in Stephan Lichtsteiner.

Don’t expect any overnight miracles, though. Arsenal finished outside of the top four last season and they could do even worse this season. Letting Wenger go was probably the correct decision, but it’s going to take some time before Arsenal reclaims their former glory.