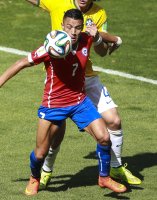 The two best teams in this year’s Copa America, Chile and Argentina, will clash in the tournament final this Saturday at the National Stadium in Santiago (4:00 PM Eastern).

Argentina entered the tournament as the favorite and remained on top of the odds throughout despite playing subpar at times and averaging just one goal per game heading into the semifinals. La Albiceleste more than earned their front-runner status in the semis, though, smashing Paraguay, 6-1.

Surprisingly, Lionel Messi didn’t score in the lopsided win. The “Little Wizard” now has just one goal in five tournament games. That said, he did set-up three of the six tallies against Paraguay and did this.

“I hope to God that my goals are being saved for the final,” Messi said to reporters after Tuesday’s victory. “But in the final it doesn’t matter whether the goals come from me or anyone else. We have met our first goal. We have made it to the final of a World Cup and now Copa America. We are coming into it with great hope.”

The host Chileans, meanwhile, have looked like the best team in the field for much of the tournament. They enter Saturday’s final averaging 2.6 goals per game over five outings. They downed Peru (2-1) in the semifinals for their third consecutive win, and the only blemish on their record is a 3-3 draw with Mexico during the group stage.

Chile’s solid play has the team feeling confident, even though many pundits aren’t giving them the respect they deserve.

“We are not afraid,” Chilean goalie Claudio Bravo told the press about facing Argentina. “The word ‘fear’ hasn’t been spoken by any of my teammates. This is something only [the media] is talking about.”

Looking at the betting opportunities, Messi is +300 to score the first goal in the final and -105 to score at any point, despite only notching one goal so far in the tournament. Two of Messi’s teammates, Sergio Aguero (+500) and Gonzalo Higuain (+600), are next in the odds to open the scoring.

For Chile, Arsenal striker Alexis Sanchez is the favorite to score first, sitting at +600, and you can get him at +210 to score, period. Sanchez has played well, but like Messi, he only has one goal in the tourney. (Plus Argentina has allowed just three goals against, all by Paraguay.)

In the trends, Argentina have taken two of the last four games from Chile, including a 2-1 win in the 2014 World Cup qualifiers in Santiago. However, Chile have come a long way since then and will play a highly aggressive style that’s apt to give Argentina’s defense trouble. With the Chileans currently sitting as +280 underdogs, there’s way more value in betting the upward-trending home side.