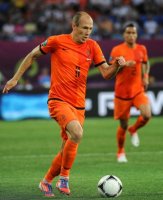 Netherlands have been playing with fire throughout the Euro 2016 qualifiers. with four games left in the schedule, the Orange will try to their house back in order when they host surprise Group A leader Iceland next Thursday (September 3) at PSV Stadium (2:45 PM Eastern).

The Dutch reached the semifinals of the 2014 World Cup and were just penalties away from reaching the final. But, sitting third in the group with ten points through six matches, they are setting themselves up for a hard road to the main draw. (Each group winner and runner-up qualify automatically, along with the best third-place team among all groups. The remaining eight third-place teams advance to four separate two-leg playoffs, with the winner of each playoff earning a spot in the tournament.)

Currently five points back of Iceland and three behind the Czech Republic, the team can do itself a world of good by taking the full three points next Thursday. Iceland did exactly that when they hosted the Netherlands back in November, blanking the Orange 2-0 in a result that shocked the soccer world.

That game wasn’t a one-hit wonder for the upstart squad, either. They are 5-0-1 through six games and have a +11 goal differential. Iceland have never qualified for a Euro competition before, but look poised to break that streak this year.

Before the win back in November 2014, Iceland had lost four of the last five against the Dutch, earning just a single point in the games from a draw back in 1983. Even though they are on a spectacular run, visiting PSV Stadium is a different beast, especially with the Netherlands relatively rested and injury-free.