Liverpool and Manchester City have had the English Premier League all sewn up in the last few seasons and both are making a strong challenge again, but this year’s tournament is more unpredictable than it has been for many years, with West Ham, Arsenal, Chelsea and Manchester United all challenging.

In some seasons, even at this relatively early stage, there hasn’t been much value for bettors looking for the best soccer bet in the Premier League futures markets. But that isn’t the case this time around. Manchester City are still rated as favorites by bettors but they are being pushed hard by Chelsea, who currently lead the competition, and Liverpool, with challenges from a resurgent Arsenal and an ever-improving West Ham side. It is shaping up to be one of the most exciting seasons in years.

Back LiverpoolTo win the Premier League

Defending champions Manchester City have not been perfect this season, but they have shown before that they can recover from a slow start, and despite poor results against Tottenham, Southampton, and Crystal Palace, they are still fully in contention. Still, the sportsbooks are not taking any chances and there is very little juice in those odds on City winning another title.

Chelsea are second favorites in the competition winners’ market and their price looks fair. Thomas Tuchel has done an incredible job with the Blues and they will not be easy to pass, although it remains to be seen how they will cope with the pressure of the run-in.

The odds on Liverpool, however, are more interesting. Jurgen Klopp’s side have started the season in stirring form. They were unbeaten in all competitions – an incredibly tough thing to do – until losing narrowly to West Ham at the weekend. Unlike Chelsea they know how to close out a finishing stretch and win the league and at their current odds they look excellent value.

Based on what we’ve seen so far, it looks likely that the winners of the Premier League will be one of the three teams mentioned in the previous section. But if you’re looking for potential surprise winners, there are some interesting options. We can probably discount Everton and Leicester, who are already too far off the pace, while Manchester United appear to be going in the wrong direction. That leaves two options

West Ham are currently third in the table and sportsbooks are wary of assuming they won’t stay in contention – the experience of Leicester City in 2016 still being fresh in everyone’s mind. The Hammers have improved on last season and that makes them dangerous. The same can be said for Arsenal. After a nightmare start to the campaign, they have closed the gap rapidly and are suddenly looking like the top four contenders. If they can continue that improvement, they could yet get into the mix.

Back Aston VillaTo be relegated

The relegation battle is often just as entertaining and gripping as the Premier League title fight, but this year, things seem a little more straightforward at the bottom.

Norwich City have looked booked for relegation from the first game and they are already five points adrift, and in search of a new manager. You won’t get much value on betting on the Canaries to be relegated, but there are some interesting options a little further up the table.

Newcastle United are on the same points as Norwich, but, given the enormous investment that the club’s new owners are expected to make during the transfer window in January, they have a good chance of climbing out of the bottom three, as do Burnley, who are battle-hardened veterans of surviving in the top flight, which in turn will put the pressure on Watford and Aston Villa.

Watford have already dispensed with one manager and are banking on the experience of Claudio Ranieri to steer them to safety, while Aston Villa are in the process of finding a new head coach, having dispensed with Dean Smith’s services at the weekend. Although Villa arguably have the stronger squad, they will need to get their next appointment right and could find themselves sucked into a relegation battle, so at the current odds, they could be worth a bet.

Back Mohammed SalahTo be top scorer

The race for the Golden Boot often provides an exciting spectacle but one previous winner of this award has already opened up a big gap over his rivals.

Mohammed Salah has found the next ten times for Liverpool, putting him three ahead of Jamie Vardy, and Leicester’s ongoing inconsistency is likely to make it hard for their star striker to close the gap. Of the other contenders, Harry Kane’s injury history makes him a long shot to win this again, while the Manchester City pair of Raheem Sterling and Gabriel Jesus is not as prolific as former striker Sergio Aguero. With Romelu Lukaku already off the pace, Salah could have this one in the bag.

Check out the leading betting sites below. You can get the latest Premier League betting odds and the best value when you bet on soccer through these betting partners. 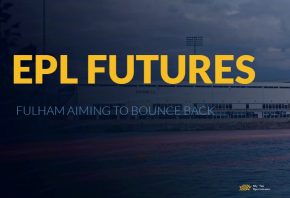