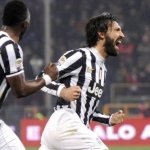 Juventus, who hold a massive 14-point cushion at the top of Serie A, risk getting caught looking ahead to their Champions League match with Real Madrid next week when they face a game Fiorentina side tomorrow at Juventus Stadium (2:45 PM Eastern).

For Juve, tomorrow’s game doesn’t mean much; with Lazio 14 backs, the Scudetto is all but clinched. Of course, the squad will want to maintain the top form that led them to the top of the standings. They didn’t do so last weekend, losing 2-1 against Torino at the Derby Della Mole.

Manager Massimiliano Allegri isn’t overly concerned with the setback, though, seeing it as a learning opportunity for his younger players: “[G]ames like that will help us grow, especially the lads who are in their first year at Juventus, and need to understand what it’s like to play for a big team and play to win every game,” said Allegri.

For Fiorentina, on the other hand, tomorrow’s game is crucial. They are currently sixth in the standings, one point back of Sampdoria but seven behind fourth-place Napoli. The team will be looking to move up at least a spot in the standings in order to earn a berth in the next edition of the Europa League. (The team is currently in the semi-finals of this year’s tournament.)

“[W]e don’t like being sixth”, said manager Vicenzo Montella. “We don’t like sixth place because it would not allow us to go into [the Europa League] directly and have a summer tour. This is why we must focus on Serie A first and then the Europa League.”

Fiorentina will also be hoping to avenge their Coppa Italia elimination suffered at the hands of Juventus less than a month ago. Both teams won away in that two-game series.

Given that Juve may have little motivation and Fiorentina won their last visit to Turin, there could be value in the draw.