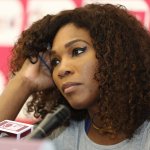 In case you haven’t heard, Serena Williams is pregnant!

The younger Williams sister steamrolled her way through the Australian Open, winning all her games in straight sets. That’s pretty impressive in and amongst itself. But now we find out that she did it whilst pregnant!

The recent announcement comes as great news for her rivals, who will not have to face her at the upcoming French Open (May 29th – June 5th). Let’s take a look at the new favorites.

Last year’s winner starts as the outright favorite in the absence of Serena Williams. She hasn’t performed too well this year, and her inconsistency may be her downfall, but clay is her territory and she’ll be the one to watch at the next Grand Slam.

A first round upset ended Simona Halep’s chances at the Australian Open, but the 2014 French Open finalist is in good standing for the 2017 edition. A slight knee injury forced her out of the St. Petersburg Ladies’ Trophy, but we can expect her to recover by late-May.

Naturally, the no. 1 ranked women’s player is among the favorites for the French Open. However, Angelique Kerber doesn’t have a great track record on clay. The best she’s achieved at the French Open is a quarter-final finish back in 2012.

Maria Sharapova will return from suspension just in time for Roland Garros 2017. The 2012 and 2014 winner will aim to pick up where she left off, but after over a year away from competition, it may be difficult for her to immediately find her rhythm.

She’s more at home on hard and grass courts, but she’s shown she can win on any surface.

The no. 3 ranked Karolína Plíšková doesn’t have a great track record at the Grand Slams, but she’s off to a stellar start for 2017. She’s currently the leading point scorer in the WTA, picking up wins at the Brisbane International and Qatar Open.

Having said that, she’s never made it into the final rounds of the French Open.