On May 9, Tony Ferguson looks to become a two-time UFC interim lightweight champion when he faces former WSOF 155-pound kingpin Justin Gaethje at the newly minted UFC 249. Ferguson is tied for the longest active winning streak in the UFC with lightweight champion Khabib Nurmagomedov with 12 consecutive wins. Gaethje, who began his career on an 18-0 run, has scored first-round knockout victories in his past three outings.

Ferguson is the No. 1-ranked fighter in the official UFC lightweight rankings, while Gaethje checks in at No. 4. Between them, these two have earned 17 fight-night bonus awards. The UFC has awarded Gaethje at least one bonus in each of his six UFC bouts. The winner of this fight could earn a matchup against Nurmagomedov.

Ferguson vs. Gaethje  odds, prediction and the pick are explained in greater detail below.

This is a tough one. Ferguson has a bottomless gas tank, unrelenting aggression and an unconventional style which makes him one of the most thrilling fighters to observe inside the octagon. Gaethje is a powerful and dynamic striker who can end any fight with a single blow. Gaethje lands a UFC record 8.57 significant strikes per minute. The downside with Gaethje is that he absorbs a whopping 9.67 significant strikes per minute.

One thing that tips the scale in favor of Gaethje is that, where he once seemed to look for a knockout as fast as possible, he’s been more tactical and patient as of late. Some credit for that change has to go to his coach, Trevor Wittman, who is a master at coming up with a game plan for his fighters.

That game planning and Gaethje’s willingness to trust in his coach could be the difference in this fight.

The 31-year-old Gaethje might be at the top of his game right now. He recovered from his two UFC knockout losses in late 2017 and early 2018 with three knockout wins. He’s become better at picking his spots and has learned to heed his coaches. If he can remain focused and calm and avoid an early slugfest with Ferguson, there’s a good chance he will end Ferguson’s 12-fight winning streak.

Ferguson has been rocked in the past, but he’s always been able to recover. However, he hasn’t faced a striker quite like Gaethje during his career. For the most part, when Gaethje rocks his opponents, they get finished.

There’s a chance this fight could go the distance, but I see Gaethje scoring a knockout either in the first round or in the championship rounds.

Under normal circumstances, I would give Ferguson the edge, but I think he made a mistake in his preparation for this fight. He and Gaethje were booked to fight on April 18, but that fight card, UFC 249, was scratched. Regardless, the 36-year-old Ferguson cut weight to 155 pounds. He must do that again for the May 9 fight and that could have a negative effect on his cardio and ability to fully rehydrate.

I expect Gaethje to work on slowing Ferguson’s pace with his incredibly hard leg kicks early on. If Gaethje can slow Ferguson even a little, he’ll be able to better time his strikes and that’s a bad thing for Ferguson.

Gaethje usually lands between 30 and 40 percent of his total strikes to the legs of his opponents.

Ferguson’s edge is his activity, so he needs to do all he can to use his motion and footwork to stay away from Gaethje’s kicks, which will come early and often.

These two have been finishing their opponents and collecting fight-night bonus awards for a while. As mentioned above, Ferguson is on a 12-fight winning streak. During that run, Ferguson has racked up nine finishes and nine post-fight awards. He has finishes in his three most-recent outings, which all came against highly ranked opponents. 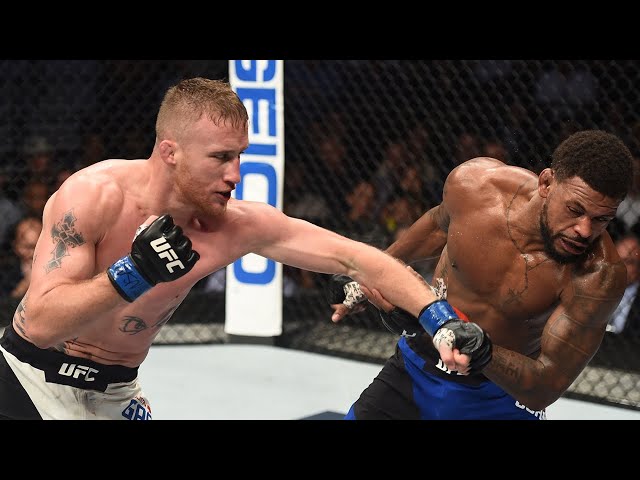 Gaethje has yet to go the distance in the UFC. His four wins with the promotion have all ended via knockout. His two UFC defeats were also by knockout. With his seven post-fight bonuses, Gaethje became the first UFC fighter to win bonuses in each of his first six fights.

Ferguson was booked to fight Nurmagomedov at UFC 249, but that fight fell through when Nurmagomedov could not leave Russia due to travel restrictions related to the coronavirus pandemic. It was the fifth time that fight had been booked and scratched. Ferguson could have opted to sit and wait for that fight, instead he agreed to face Gaethje.

This matchup is a huge risk for Ferguson. If he loses, he will need to put together another winning streak to get a title shot in the stacked lightweight division. Gaethje was rumored to be in line for a matchup against former two-division champion Conor McGregor, but a win here could earn him a title shot instead. Most of the pressure in this fight is on Ferguson as he’s been chasing Nurmagomedov for years.