Since his return to the Welterweight division, Diego Sanches has truly been a nightmare. After he was destroyed by BJ Penn in the UFC Lightweight Championship in 2009, Sanchez moved back up to Welterweight, where he lost his debut via unanimous decision to John Hathaway. 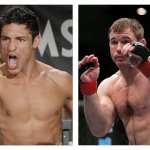 After that fight, Sanchez woke up. Two Fight of the Night awards in a row and now he faces UFC Hall of Famer and Welterweight legend Matt Hughes.

Hughes has not been as active of late, after also losing to BJ Penn in their rubbermatch fight at UFC 123, it was speculated the Hughes may retire and leave the fight game forever.

But he was enticed back to try for another run at a title.

Hughes is a ripe 37 years old now, and though he hasn’t had a terrible record in the UFC lately, he is certainly not the dominating force he once was in the UFC.

When Sanchez won The Ultimate Fighter 1 and stormed into the UFC, the lofty expectations were stunted with losses to Josh Koscheck and Jon Fitch, prompting his move to lightweight, where he won his way to a title shot.

Surprisingly, Hughes isn’t as much of an underdog as you might think at +175, and I think he still holds some value as an underdog here. Sanchez has been impressive as of late, and if he can get through the first round with Hughes, that is where this new incarnation of Diego Sanchez has been most effective.

Hughes has value here, but -220 for Sanchez is a great line for a kid who has somehow reinvented his passion for the fight game.