Before the title fights, Ben Askren will make his highly anticipated UFC debut against Robbie Lawler in a welterweight eliminator of sorts. If Askren wins, his next fight could be a title shot.

Below, we preview the three big fights on the UFC 235 card, complete with odds comparisons and expert picks. 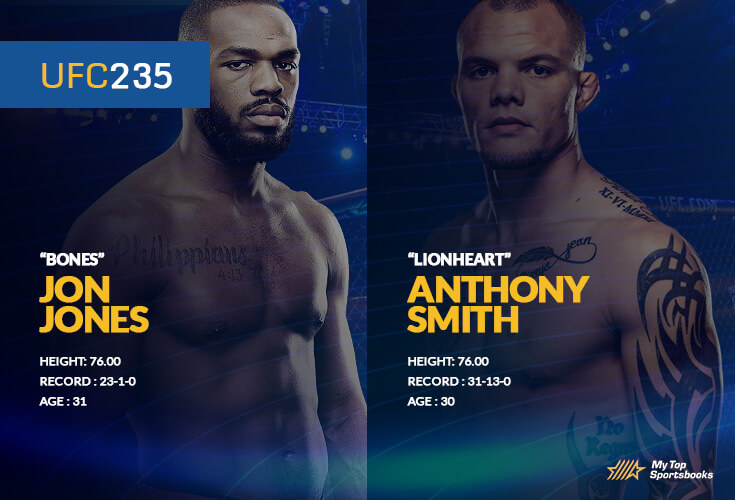 Jon Jones (23-1-1) is the most dominant fighter in the world today. For all intents and purposes, he has never been defeated in the Octagon; his only loss was due to a disqualification for illegal elbows in a fight that he was clearly winning. Prior to his most recent fight against Alexander Gustafsson at UFC 232, some questioned whether he would return in peak form after a year-and-a-half layoff due to suspension.

Terrifyingly, he looked even better than when he left.

Gustafsson, who had given Jones arguably his toughest test back in 2013, was dominated from the opening bell and finished midway through the third round. Jones won the striking battle 63-24, landed 57% of his significant strikes compared to just 24% for the Swede, and scored the only takedown of the fight.

In short, it was simultaneously an MMA clinic and a stark reminder of just how lethal this man is.

Anthony Smith (31-13) has pieced together a nice three-fight win streak since moving up from middleweight, earning this title shot in the process. But the 30-year-old Texan is now punching above his weight (so to speak) against Jones.

His most recent loss to Thiago Santos in Feb. 2018 demonstrated that elite strikers can best him on the feet. His 2016 setback to Cezar Ferreira showed that he can be taken down and controlled by preeminent wrestlers.

Jon Jones is both of those things.

While both Jones and Smith stand 6’4, Bones has a significant reach advantage (84.5″ to 76″). He put that to good use against Gustafsson, and Gustafsson (79″ reach) is both longer and a more technically gifted striker than Smith.

It’s hard to lay -1030 on a title fight, even one that’s as lopsided as this one on paper. Anthony “Lionheart” Smith earned his nickname through sheer will-power. He’s not one to give up and will do everything he can to last in this fight. Consider parlaying Jones with OVER 2.5 rounds when those are released closer to the fight. 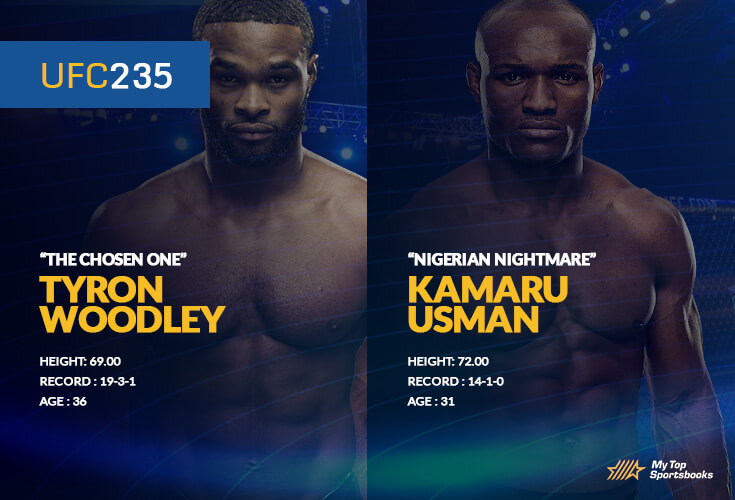 Tyron Woodley (19-3-1) is an All-American wrestler routinely lamented for his boring style. While he quieted those critics with a resounding second-round stoppage of Darren Till in his last fight, chances are still that he turns this into a plodding, grind-it-out affair.

Kamaru Usman (14-1) is another excellent wrestler, but he doesn’t have the pure wrestling pedigree of Woodley, and he doesn’t have as strong a base either. To put it another way: what Usman does best, Woodley does better. Usman landed 12 takedowns in his resounding win over Rafael Dos Anjos in November, and another eight when he rolled over Emil Meek.

Woodley hasn’t suffered a takedown since 2014. He has a takedown defense of 94%.

When it comes to stand-up, Usman should have an edge, but it won’t be as pronounced as some think. Woodley wound up outstriking Stephen Thompson in both their matchups. According to FightMetric.com, he won the significant-strikes battle against Darren Till 57-0!

If his hands look as good against Usman as they did against Till, it is very hard to see how the challenger emerges from this fight with his hand raised.

The best odds right now for Woodley are at BetOnline (-180) and I would lay that money to get behind one of the most underrated champions in MMA today. 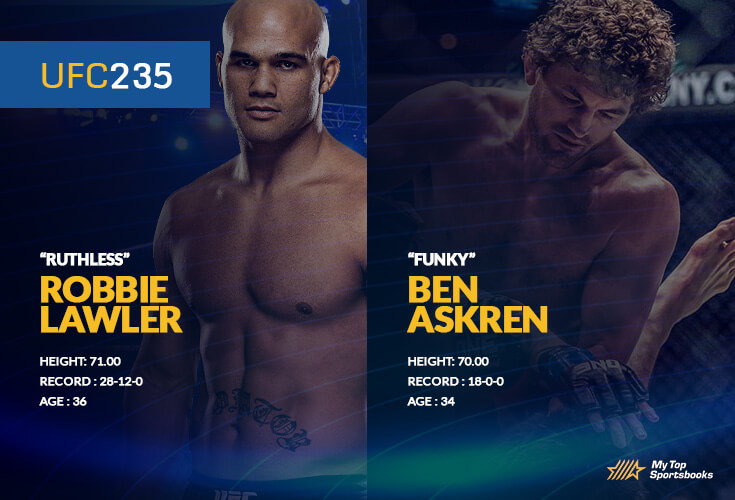 Ben Askren (18-0-1) is finally going to lose the moniker of “Best Fighter Not in the UFC.” The longtime Bellator and ONE welterweight champion starts his quest to win UFC belt with a fight against the ever-dangerous Robbie Lawler (28-12-1).

This is a classic wrestler-vs-striker matchup. Askren, an Olympic freestyle wrestler, will look to take the fight to the mat ASAP if he’s playing it smart. Lawler, who has 20 wins by KO and just one by submission (all the way back in 2005), will do everything he can to keep it on the feet.

There aren’t many MMA fighters who are better wrestlers than Johny Hendricks, but Askren is one of the few. Lawler will make him work for the takedowns, but they are going to come, especially in the latter stages of the fight.

The risk for Askren is eating a huge shot — either a punch or a knee — on the way in. It’s a real risk against Lawler, who likely hits harder than any opponent Askren ever faced in Bellator or ONE, but the percentages favor Askren.

It’s savvy scheduling by the UFC matchmakers. Askren is their shiny new welterweight contender and they’ll be eager to put him in the title mix; Lawler is a recognizable name with a crowd-pleasing style, but it’s not a style that matches up well against “Funky.” If Askren wins, he’ll immediately become a title contender by virtue of beating a former champion. If Askren loses, at least the UFC should have a new highlight reel knockout to play on loop.

Again, I don’t love the odds you have to lay to take Askren straight-up. I give him the edge, but not a roughly 75/25% edge. If he wins, it will likely be by decision. Lawler hasn’t been submitted in nearly a decade. As the fights draw nearer, sportsbooks will post alternate lines for various outcomes, like Askren by submission, Lawler by (T)KO, and Askren by decision. I’ll likely be playing Askren by decision, assuming a payout in the +100 range.