The UFC returns to the Target Center in Minneapolis, Minnesota for the first time in nearly seven years for Saturday’s UFC on ESPN 3 fight card. Like that previous visit, which drew 7,049 fans to the arena, this card features a heavyweight contest in the headlining spot. In that matchup, no. 2 ranked Francis Ngannou meets no. 3 ranked  Junior Dos Santos in a bout that could result in the winner getting a shot at the UFC title.

Early in his career, Ngannou developed a reputation as a fearsome and powerful striker. He displayed that power when he delivered one of the most unnerving knockouts in UFC history when he caught Alistair Overeem with a terrifying uppercut in their 2017 matchup. Two lackluster efforts followed that outing, including a unanimous decision loss to then-champion Stipe Miocic. Ngannou found his groove in his two most recent outings, where he earned two knockout wins in a combined 71 seconds.

Dos Santos, who is a former UFC heavyweight champion, has alternated wins and losses over eight fights between May 2012 and May 2017, but he is unbeaten in his past three efforts. His two most recent bouts were both second-round knockout victories.

As mentioned above, Ngannou is one of the hardest hitters currently plying his trade in the MMA game. He doesn’t land a high percentage of his strikes, only 37% of his attempted significant strikes find their mark, but then again, he doesn’t have to thanks to the power he possesses in his hands. The downside of that power is that he has not developed a very good clinch game and his wrestling and defensive ground skills are suspect at best.

Dos Santos relies on his boxing and low kicks. His output is much higher than Ngannou’s, he lands 4.76 significant strikes per minute compared to Ngannou’s 2.05. His boxing skills have served him well during his career, but his reliance on his hands have also found him getting positively pummeled. An example of this was his UFC 155 loss to Cain Velasquez, where he left the octagon with his face bruised, bloody, swollen, and almost unidentifiable. Dos Santos does possess a black belt in Brazilian jiu-jitsu, but he has not earned a submission victory since his second pro fight, which took place in 2006. 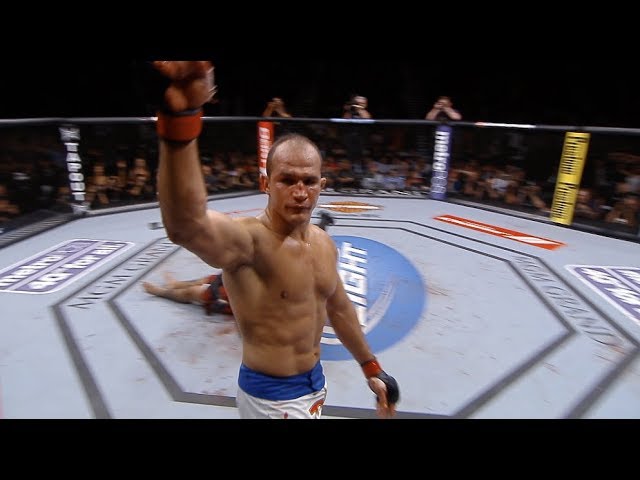 Ngannou vs Dos Santos Tale of the Tape

What’s on the Line?

The UFC heavyweight division has its next title fight booked. That contest pits current titleholder Daniel Cormier against the man he took that belt from, Stipe Miocic, in the main event of UFC 241, which takes place in August. With their high rankings, it makes sense that the fighter who leaves this contest with his armed raise will get the next shot at that strap.

This is an extremely tough fight to pick. Dos Santos has the experience and skill edge, but Ngannou has the type of power and speed that can turn out the lights in a millisecond. Dos Santos has looked great in his past three fights and his skills could allow him to upset Ngannou. To get the win, Dos Santos will need to set the pace and control the distance early in the fight. If the former champ can pepper Ngannou’s lead leg with low kicks for the first round or two and avoid a powerful counter, he could sap the energy from Ngannou and then use his boxing skills to touch up his depleted opponent as the fight goes into the later rounds. One thing Dos Santos cannot do is get drawn into a slugfest.

Ngannou’s best bet is to come out fast and move right into his striking range. He needs to eat the leg kicks that’ll be coming his way and throw powerful strikes right from the referee’s signal to start the fight. Dos Santos’ three most recent losses have come via TKO, so there’s no reason to believe that Ngannou cannot stop Dos Santos if he can catch him, but he’ll need to do that early, as Ngannou’s cardio is suspect.

If this fight goes past the second round, it will be Dos Santos’ to lose. However, I’m not confident that he can avoid the powerful hands of Ngannou for that long.