The Ultimate Fighting Championship, otherwise known as the UFC, has grown mightily over the past few years due to its international appeal and huge stars such as Conor McGregor, and with that, UFC betting has also soared to new heights. UFC betting odds at times can be a bit confusing, so the following will outline how to read and find the best UFC fight odds, including the upcoming UFC Vegas 35.

If you want to get into betting on the UFC, or anything in general, it is always important to know how to read the odds of each specific bet that you can place. Like other sports and betting opportunities, the favored bet will be the lower figure and can typically be found with a minus in front of the figure. The underdog, or non favored bet, is typically found with a plus in front of a higher figure.

The picture below sets a good example.

Fighter A comes in as the betting favorite on this book at -150 odds, and Fighter B is the underdog of the fight coming in with odds at +180.

Now that you know how to determine which bet is the favorite or underdog, I will now outline the different types of bets that can be placed on UFC fights and how to best approach them.

Moneyline bets are the most basic type of bet in any setting and work the same in the UFC as they do in other sports.

Placing a money line bet is simply when you choose which fighter you believe will come away with the victory. The example odds given above when I was explaining favorites and underdogs is a great example of what a money line bet on a fighter would be.

Fighter A is the -180 favorite on the money line, while Fighter B is the +180 underdog on the moneyline.

For these types of bets, it does not matter in which manner that the fighter you choose wins the match. As long as he or she has their hand raised at the end of the fight, you will win your bet.

This is by far the easiest and most popular bet in any sport, including the UFC, as everyone always has their predictions about who will come out victorious. 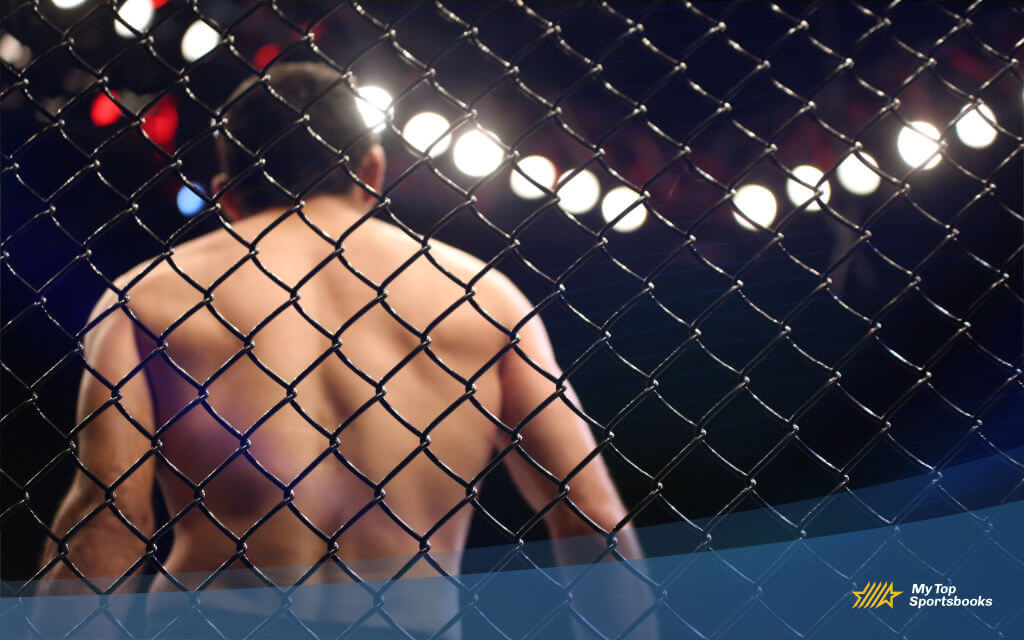 One of the easiest ways to bet on a UFC fight or any type of MMA/Combat sport is by betting the over/under. In an over/under bet, the book will post a round total, and all you need to do is a bet on whether the fight will last longer or shorter than the given round total.

In the UFC, the over/under will vary based on the length of the fight and the fighters in the matchup.

For example, If the two fighters in the octagon are known knockout artists, the over/under is likely to be shorter and listed at close to 1.5 rounds.

But if the fighters are known to be more laid back and technical, you will typically find the over-under to be listed at 2.5 rounds, as most UFC fights are three rounds unless they are a main event or championship bout.

Here is how it is typically determined

While these aren’t always the case, this seems to be the most common.

To win an over bet in an example bet of over 1.5 rounds, the fight must surpass the 2:30 mark of the second round. For under bets, the fight has to be completed before that time.

While this could sound like the previously mentioned over/under bets, it has a little bit more risk to it.

Round betting allows bettors to bet on what round they believe the fight will end, and the payout that you receive due to the odds are much better when betting this way.

Sometimes, you can also bet on a certain fighter to win the fight during a round as well, which once again increases the odds.

Like betting on the rounds, method of victory betting provides bettors with increased odds if they are able to determine how the fight will end.

There are three different options and ways that a UFC fight can end, KO/TKO, submission, or by decision/points.

For example, in the previous UFC card, UFC 265, heavyweight Cyril Gane to win by KO/TKO was listed with odds of +130 compared to betting on his moneyline at -330. If you were to bet $100 on the method of victory, you come away with a payout of $130. However, if you were to bet the same amount on the moneyline, you are only walking away with just around $30.

While these bets are riskier, they provide bettors with increased value.

Another popular type of betting when it comes to the UFC is parlays. A parlay bet is when you combine bets on several fights to combine the payouts. This is a great way again to increase the odds and payout but adds increased risk because if one bet is wrong, then you lose out on the entire parlay.

Parlays are huge in UFC betting due to the large number of fights that occur on every single UFC card. With cards that hold up to 12 fights in one night, there are plenty of opportunities for parlay bets.

Prop bets are where you can potentially find some of the highest odds in UFC betting. Several books will offer options to bet on who will earn certain bonuses like Knockout of the Night, Submission of the Night, or Fight of the Night, or you can even bet on which fighter you believe will throw the most strikes or secure the most takedowns.

These bets typically take a lot of research to determine what outcome is more likely.

Live betting is becoming bigger and bigger in every sport, and the same would apply to the UFC. Some books will allow you to bet on all the mentioned types of bets while the fight is going on or in between rounds.

If you are watching a fight you had not bet on, but you feel a fighter is gaining momentum, you can go to certain books and bet their moneyline or whichever bet you choose during the match.

Live bets can be nerve-racking, but they add a little bit of fun to an eventful night of fights. 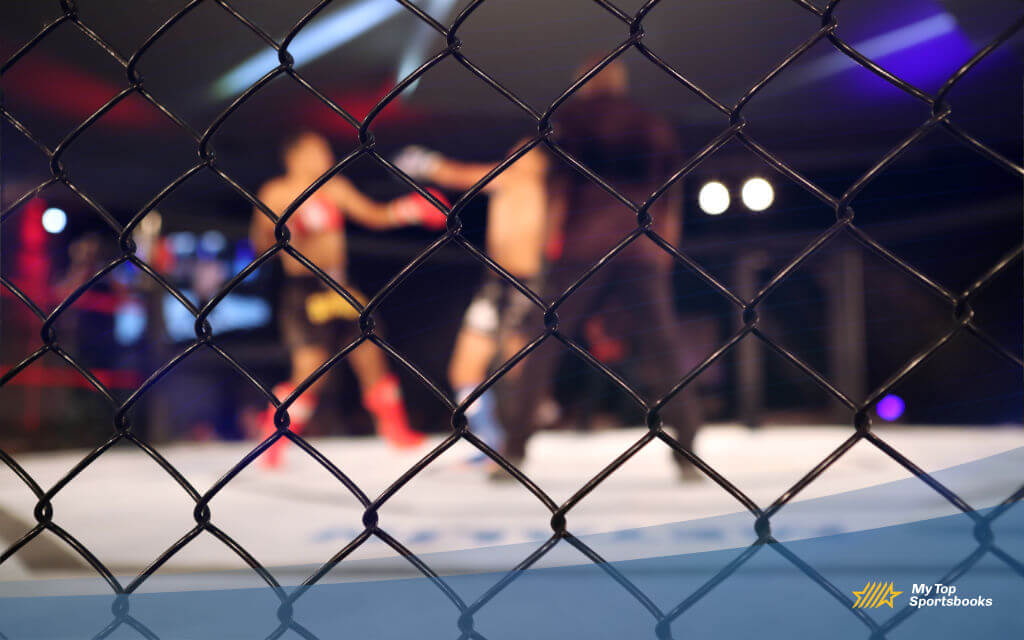 What to Look at When Betting in the UFC

A fighter’s strengths and weaknesses are one of the key things to look at when determining what bet you want to make for the fight.

If you know a fighter is strong at Jiu-Jitsu, odds are they are likely to finish the fight by submission or decision and not by KO. If they are known to have a boxing background, they are more than likely to win by KO/TKO.

The strengths and weaknesses are also important to look at when looking at fighter matchups. If a fighter is strong on the ground and with submissions, they would have the advantage against a fighter with a boxing background. But it could also be the case that two fighters have similar strengths, and in that case, you look at who is stronger in their other abilities.

While it does not always play a difference, reach and height are some of the key measurables in any type of combat fighting. If the fight is a battle between two fighters who are known to keep the match on the feet and brawl, then it is likely that the fighter with the longer reach and taller height will have an advantage in getting strikes off.

Having the taller height also changes angles in which fighters have to throw strikes or attempt takedowns. Fighters often spar with people in their gym that are reminiscent of who they will fight in order to get used to those movements.

What sites allow me to bet on UFC?

This page provides online sites that are vetted and provide odds for UFC fights.

How often are UFC fights?

There is typically a fight card every weekend, but on some occasions, they will take a week off. The UFC will have big events such as UFC 265, but they also have their patented UFC Fight Night.

Is it illegal to bet on the UFC?

No, it is legal to bet online on UFC fights in the US in nearly every state.

What happens if someone is disqualified?

The fighter who wins by way of disqualification is often awarded the victory by DQ and will be the victor on the moneyline. It is also typically considered a win for that fighter by TKO by many books.

Is betting on the UFC profitable?

Like all betting, there is risk involved with high reward. If you are a big MMA fan and know a thing or two about the sport, then betting on the UFC could provide you with some easy money.