The UFC is back this weekend with the new face of the franchise and current female champion, Ronda Rousey taking on the veteran Sara McMann, this Saturday at the Mandalay Bay Events Center in Las Vegas, Nevada, for the Bantamweight title in a 5 rounds matchup. 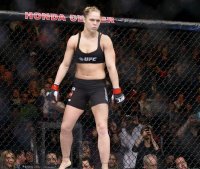 ‘Rowdy’ Rousey is 7-0-0 on her career and is the face of the UFC at the moment; not only does she looks unbeatable, but she’s bold enough to attract fans and detractors.

“My MMA striking is the best in the game,” Rousey told USA TODAY Sports.

“I’ve reached a certain level of competition where what’s required out of striking to come into the clinch to grapple is a lot more complicated than at the lower levels,” Rousey added. “It requires much more high-level footwork and striking to be able to use grappling at all.”

Sara McMann is 33 years old veteran with an 8-0-0 record, who was an Olympic champion in wrestling; she presents a difficult challenge considering she has plenty of experience.

“I don’t know if it was necessarily my Olympic success that has [played into my MMA success],” McMann recently told MMAWeekly.com. “I think you can take other Olympians or Olympic medalists and sometimes that doesn’t translate into success in another sport. So I think part of it is each individual, and that’s why when I began MMA I said, ‘Maybe I’ll like this and maybe I’ll take to it … but maybe it won’t.’”

Sara McMann is listed +350 in the UFC Odds, and Ronda Rousey is the favorite of course, listed at -450.