On Saturday, Cory Sandhagen continues his path toward a UFC bantamweight title fight when he welcomes former 135-pound UFC titleholder T.J. Dillashaw back to the octagon for the first time in more than two years.

Sandhagen joined the UFC in January 2018. He is 7-1 with the promotion and coming off two “Performance of the Night” bonus-winning knockouts. Sandhagen, who is the No. 2 ranked fighter in the official UFC bantamweight rankings, last fought in February. He defeated former lightweight champion Frankie Edgar in that outing, ending the contest 28 seconds into the contest.

Dillashaw has been out of action since a January 2019 loss to Henry Cejudo. Dillashaw was the UFC bantamweight champion at that time. He dropped to 125 pounds to face Cejudo, who was the 125-pound champion. Cejudo won that fight by TKO in 32 seconds. Dillashaw tested positive for EPO and was suspended for two years. He surrendered his 135-pound title when news of the positive drug test broke. Dillashaw is not ranked at 135 pounds.

Sandhagen’s third fight with the UFC took place on the card where Dillashaw lost to Cejudo. He fought Mario Bautista on the prelims that night. Since then, Sandhagen has defeated John Lineker, Raphael Assuncao, Marlon Moraes, and Edgar. He also lost to current bantamweight champion Aljamain Sterling. Dillashaw sat on the sidelines and watched Sandhagen surge up the rankings.

I think Dillashaw improved his skills while he was suspended, but nothing beats the actual competition and Sandhagen has faced top-notch adversaries while Dillashaw has been restricted to the gym. The 29-year-old Sandhagen is among the next generation of talent that has emerged while Dillashaw has been out of action. I think the 35-year-old Dillashaw can be competitive upon his return. I don’t think he will be competition for fighters like Sandhagen and Sterling. I think the younger crop of UFC bantamweights has passed him by.

Outside of the Edgar and Bautista fights, Sandhagen has never been a big favorite in his UFC outings. In fact, he was the underdog in three of the fights he won. Sandhagen is not a poor value at -175 to -190, but he’s not a great value either. A better investment in Sandhagen might be over/under on fight duration or method of victory.

Sandhagen has the body type to stay away from the stockier Dillashaw and that will afford him more offensive weapons than his opponent. With four UFC knockouts on his record and with Dillashaw having two knockout losses on his record, I think Sandhagen will stop the former champion via strikes and I think he will do so before the end of the second round.

Prediction: Sandhagen via knockout -190 via BetUS.

Sandhagen has the physical edge in this fight and while he might not have the technical skills of his opponent, he is fighter who can be unorthodox and surprisingly fast with his attacks. He has also been much more active than Dillashaw and that is going to count for a lot in this matchup.

This could be the fight that launches Sandhagen to a UFC title shot. The same holds true for Dillashaw, who has long been a favorite of UFC president Dana White. Even if Dillashaw doesn’t get a win, this fight is important for him. This contest will give him — and the UFC brass — an idea of where he stands in the current landscape at 135 pounds.

Check out the best sportsbooks to bet online on the UFC Vegas 32. 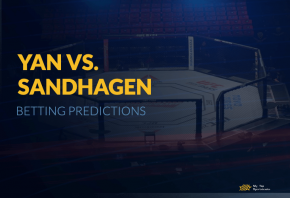