The 33-year-old Smith seems to be emerging from a rough patch as of late. Smith went 1-3 between March 2019 and August 2020, but he is currently riding a two-fight winning streak. The No. 6 ranked fighter in the official UFC light heavyweight rankings, Smith has stoppage wins over Devin Clark and Jimmy Crute in those victories.

Like his opponent, the 30-year-old Spann is looking to put a loss behind him. Spann was on an eight-fight winning streak when Johnny Walker knocked him out on September 2020. Spann, who is currently ranked No. 11 in the official UFC 205-pound rankings, rebounded from that setback with a TKO win over Misha Cirkunov in March 2021.

Spann is a live underdog in this matchup, at least during the first five minutes of the bout. He has the power to turn out Smith’s lights, but if the fight goes past the first round, which I think it will, Spann is in trouble.

Spann does not have a good gas tank, and he throws his strikes with too much power. With the stakes of this fight and his inexperience in high-profile matchups, I think Spann will overextend himself in the early going. Smith’s goal, which I think he will succeed in, will be to work his kicks and jabs and keep Spann at distance and allow him to tire himself. Once Spann is running low on gas, I think he will make a mistake and that will allow Smith to score a takedown and get the fight to the mat, where he will overwhelm Spann and finish the contest.

The one thing that gives Smith an enormous advantage in this fight is the quality of competition he has faced during his long MMA career. During his most recent stint with the UFC, Smith has faced seven fighters who were UFC champions, former UFC champions or UFC title challengers. He went 4-3 in those bouts. This is the “X-factor” for Smith against Spann. No matter what Spann has in his arsenal, Smith has seen it and dealt with it. Spann will not intimidate Smith in any way. The mental and skill aspects of this fight favor Smith in a big way and that’s why I am confident he is the better betting value in this fight, even though he is the favorite.

Pick: Smith via submission -115 via SportsBetting.

Spann has the power advantage in this fight. He is also the taller and longer fighter, but that power will have to get through the high-level experience Smith has, and I don’t think that will happen. Here is who Smith has faced in his recent outings with the UFC: Hector Lombard, Thiago Santos, Rashad Evans, Mauricio Rua, Volkan Oezdemir, Jon Jones, Alexander Gustafsson and Glover Teixeira. That’s a who’s who of some of the better fighters in the UFC. That quality of competition gives Smith a huge edge over Spann, who is still working his way up to top-10 UFC opponents.

After a rough 1-3 run, Smith is working his way back to the top of the division. A win over Spann will be another small step toward the ultimate goal of another title shot. If Smith loses to Spann, he will have to reset and start anew toward that goal. With the number of fights Smith has on his record and his standing in the UFC, a loss to Spann won’t end his title hopes, but it will be a big blow.

If Spann wants to break into the top-10 of the light heavyweight division and work toward a title shot, this is a must win for him. 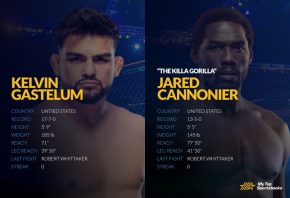