On Monday, the Las Vegas Aces face off against the Dallas Wings for the third time in the 2021 WNBA betting season. The Aces sit atop the standings in the WNBA’s Western Conference with a record of 21-8. The Wings bring a record of 13-17 into the game. Both teams have qualified for the 2021 WNBA playoffs, which are scheduled to kick off on September 23.

Check the favorites to win the 2021 WNBA Championship.

The first 2021 meeting between these two teams took place in June in Las Vegas. The Aces won that game by the score of 85-78. In the second matchup went slightly worse for the Dallas club as they dropped that game, which took place at College Park Center in Arlington, Texas on July 11, by a score of 95-79.

A’ja Wilson led the Las Vegas squad in the first meeting of these two teams. She played 35:12 and put up 28 points and added 14 rebounds and three assists. Satou Sabally was the top scorer for Dallas. She scored 24 points in 33:17 and added eight rebounds and two assists.

Wilson was also the leading scorer for Vegas in the July matchup with 22 points, 13 rebounds and eight assists during 34:14 of game time. Vegas held Sabaly to five points in that game. Two Wings’ players scored 14 points in the loss, Moriah Jefferson and Allisha Gray. 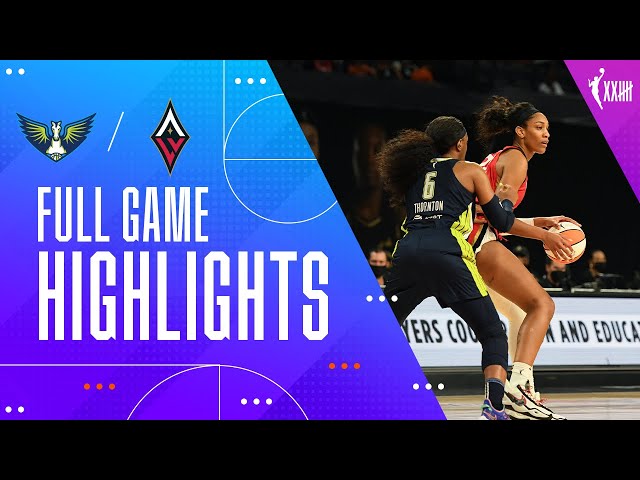 Wilson is in the running for league MVP in 2021. She has averaged 18.7 points per game, which is fifth best in the league. Wilson leads the Aces in PPG and rebounds per game with 9.3. Liz Cambage is another Ace to watch on Monday. She averages 14.7 PPG and 8.4 RBG.

As for Dallas, their top scorer is Arike Ogunbowale. Ogunbowale scored 21 points in the two games (11, 10) against Vegas, which is far below her average of 18.5 points per game in 2021.

If Ogunbowale can put things together in the third meeting between the Aces and the Wings, Dallas has a shot at winning. If she cannot score over 15 points, the Dallas club will be hard pressed to get a win against Vegas.

On a normal day, I would favor the Las Vegas Aces to defeat the Dallas Wings. Monday is not a normal day. At halftime the Aces will honor Becky Hammon by raising her No. 25 to the rafters of the Michelob ULTRA Arena. Hammon is the franchise career leader in assists (1,333), made three-pointers (498), and free throw percentage (92.1%). She ranks second in points (3,474) and scoring average (15.6) and fourth in three-point field goal percentage (38.8%).

Hammon was a six-time WNBA All-Star, and four-time All-WNBA performer. She was recently named one of the 25 greatest and most influential players in WNBA history.

I expect the Aces will be fired up for this game and I wouldn’t be surprised if they defeated Dallas by a bigger margin than in their previous 2021 meetings.

WNBA Playoffs Picks: Sun vs Sky and Storm vs Aces

WNBA Playoffs Picks: Sun vs Sky and Storm vs Aces