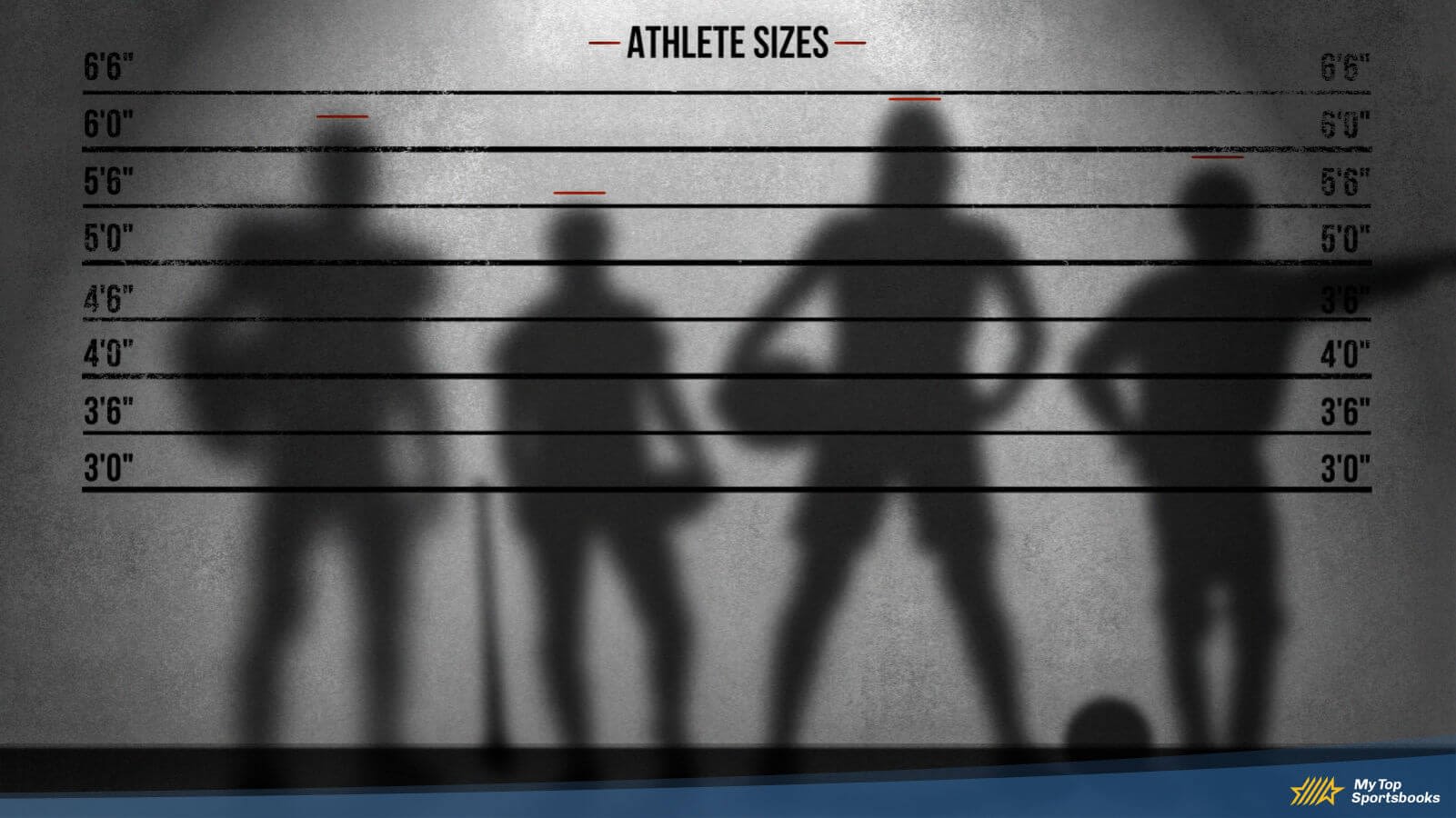 An athletic body is a wonder to behold. Their speed, strength, and flexibility are revealed in their picturesque and sinewy silhouette. While we normally think of them as sculpted and agile, in reality, the type of ideal body for different sports varies wildly. You may have an image in mind when you think of the body size and shape of your favorite athletes, but how do they compare to the top athletes in other sports?

We wanted to see how the best athletes across different sports stacked up against each other. Who are the heaviest and the smallest among these elite athletes?

Our list of elite athletes compiles the best from top sports and compares their heights and weights. We include men’s and women’s leagues on our lists. These are stars that will be familiar to fans of sports betting in the USA and around the world. While picking the very best athlete from each sport will inevitably be somewhat subjective.

This is why we used authoritative sources to make our selections. When possible, we used the most recent MVP from the top sports league. We also used authoritative rankings in combat sports such as the current reigning champion of each weight class.

Fury is the heaviest and the second-tallest on our list. He weighs more than the UFC heavyweight champion, Francis Ngannou, who comes in at 257 pounds and six feet four inches. The smaller height probably deals with reach being less important in MMA, where grappling plays a huge role.

Compared to the Smallest Male

Have you been able to guess which athlete is the smallest on our list? Jockeys are notorious for their petite figures. This is essential for going quickly and with utmost control while on horseback.

The jockey occupying the first position in the Thoroughbred Racing Commentary global rankings is the New Zealand jockey, James MacDonald. This athlete comes in at a shocking 115 pounds. That is a startling 41% of the weight of Fury, the heaviest athlete on our list. This really shows that athletes come in all shapes and sizes.

The heaviest female athlete from our list of elite stars is Breanna Stewart, of the WNBA’s Seattle Storm. She is heavier than the UFC women’s champion and heavier than Kendra Cocksedge, the rugby great.

Stewart weighs 170 pounds and is 6 feet 4 inches tall. The majority of this weight seems to be in height, as she is a full foot and 2 inches taller than Cocksedge, but only 29 pounds heavier. Similarly, Stewart towers 11 inches over star boxer Katie Taylor, but beats her out by 35 pounds.

Why is our Rugby Star Smaller than the NFL MVP?

One of the most surprising findings of our research was the large distance between our rugby star and last year’s NFL MVP. These are somewhat similar sports that both involve tackling and quite a bit of physical contact.

Last year’s World Rugby Men’s 15s Player of the Year was Antoine Dupont. He weighs 185 pounds and is 5 feet 9 inches tall. While the NFL MVP, Patrick Mahomes, is a towering 6 feet 3 inches and 230 pounds.

Quarterbacks like Mahomes are generally not involved in too many scuffles. It would make sense for a lineman to have so much more weight. Why does a football player need 50 more pounds than a rugby player?

One explanation is that quarterbacks need to be taller. They need to comfortably see over the defensive and offensive line in order to deliver those lasers to the wide receivers, and in general, understand what is happening on the field.

Plus, Dupont is a scrum half, which is traditionally the smallest player on the rugby team. With so many different positions across the two sports, it is difficult to make a direct comparison.