How to Bet on UFC Fights for Beginners 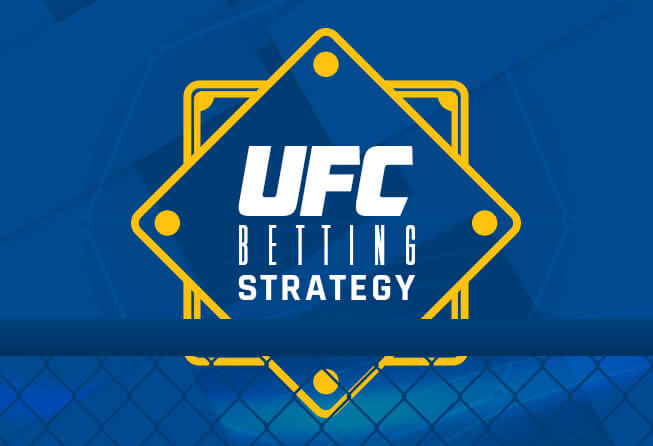 The UFC is the most popular mixed martial arts organization in the world. With 12 or more fights per event, the UFC gives fans plenty of opportunities to bet on the sport, especially since there are various manners to bet on each match-up. That’s why learning the fundamentals of UFC betting and the sport itself will make it that much easier become a successful bettor. What follows is an in-depth breakdown of how to bet on the UFC fights and everything you need to know to get started.

Knowing how to read and understand UFC odds is vital before you decide to bet on UFC fights, it’s also quite straightforward once you see them in action. Similar to most major sports the betting favorite is represented with the lower figure, usually a minus (-) and the underdog is the higher figure, typically a positive one (+). These American odds and can also be represented as fractional odds or decimal odds, ultimately they serve the same function.

Now that you know how to read UFC odds, you are probably wondering what types of bets are available for UFC fights. Similarities can be drawn between betting on other combat sports such as boxing. The moneyline for the main event of major UFC events is usually released months in advance, whereas the props such as round betting and method of victory are typically released a week or two ahead of the event.

There are three main types of bets in the UFC. These are also known as UFC betting markets and include the moneyline, round betting, and method of victory. Below is a breakdown of each type of UFC bet you can place on a fighter.

With a UFC moneyline wager, you pick the fighter you believe will win the bout. The bookmaker puts odds on each fighter to win, with one combatant as the favorite and the other as the underdog. Occasionally the odds will be even for two evenly matched opponents, this is known as pick ’em.

In this type of bet, the bookmaker sets a UFC line on how long the fight will last and the bettor decides if they think the contest will go longer or shorter than that line. If a bout has an over/under of 1.5 rounds and the odds are -200 on the under and +275 on the over, that means the bettor would have to wager $200 to win $100 on the fight going less than 1.5 rounds or they would need to wager $100 to win $275 on the contest going more than 1.5 rounds.

In this type of bet, the bookmaker sets odds on the outcome of the fight. A bout can end by decision (split, unanimous, majority), draw, KO/TKO, or submission. Bettors can also wager on if a fight will make it to a specific round. These types of bets follow the same pattern as moneyline and round betting. Here are some examples of method of victory odds for a UFC fight. 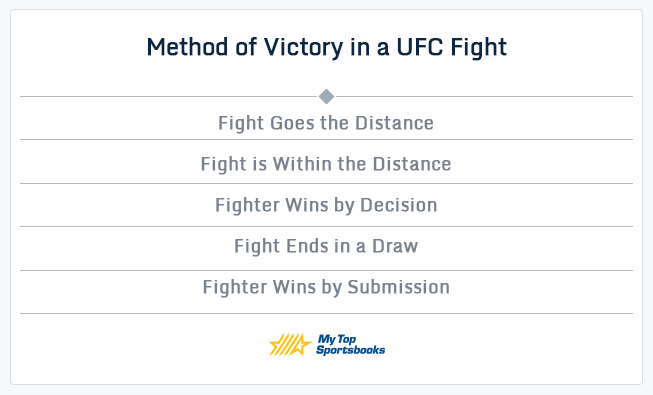 Now that you know how do ufc odds work let’s focus on some aspects that can help our overall betting strategy for UFC fights. In UFC rematches, the victor of the first contest wins the rematch approximately 68% of the time. Out of the 28 title fights that had an immediate rematch, 19 times the winner of the initial bout won the second as well.

When looking at rematches, it’s also important to look at the time between the fights and how the fighters’ have either progressed or regressed. For example, the first time Dustin Poirier and Max Holloway fought was in February 2012. At the time, Holloway only had four pro fights and was making his UFC debut. Poirier was a -714 favorite over Holloway, who was a +325 underdog. Poirier won that fight by first-round submission.

The next time Poirier and Holloway faced off was April 2019. When that fight took place, Holloway was the featherweight champion and had won 13 contests in a row. The odds for that rematch saw Holloway come in as a -256 favorite over Poirier, who was a +165 underdog. Poirier won the rematch by unanimous decision.

Typically UFC betting odds for contests between big-name competitors are released shortly after the fights are made official. The betting lines for an entire UFC card are released in full early during fight week. Las Vegas odds are typical not released until a bout has been officially confirmed, as to avoid the early money going on a line that was set incorrectly and losing profits.

One of the reasons to bet early is to take advantage of potential mistakes in the early odds. If bookmakers don’t have complete information on a fighter, the odds could be in a bettor’s favor. Another advantage is that the odds could be advantageous before the action begins to come in on the competitors.

Some disadvantages of betting early include potential injury to a fighter, a bad weight cut, the market making the odds more favorable and a lack of complete information on strategies and match-ups.

A parlay bet is when you combine bets on several fights to combine the payouts. When it comes to placing bets on UFC fights a parlay bet will result in a higher return. The downside of a parlay bet is that if you get one fight wrong, you lose your entire stake. One of the more famous parlays in UFC betting history came in 2015 when a bettor turned a $1 bet into $48,921 by going with nine underdogs on the card.

One of the best ways to parlay a UFC bet is to find heavy favorites that you are almost sure will win and then balance them with a couple of fights where you feel the underdog is a safe bet. A four-fight parlay where you bet $100 on a -500 favorite, a -600 favorite, a +150 underdog and a +200 underdog would pay out $900. If you’d bet those fights individually, the payout would be $386.67.

The best way to handle a parlay is to look very deeply at the event and go with fights you are incredibly confident in. The fewer the number of match-ups you parlay, the more of a chance you have of picking a winner correctly.

Regardless of your experience as a bettor, it’s important to stay ahead of the curve by doing your research prior to betting on ufc fights. Even the most seasoned UFC bettors will know each fighters’ key strengths and weaknesses before placing a bet. As the saying goes, “styles make fights” and that has never been truer than in the UFC; every fighter has a weakness that can be exposed by the right opponent.

Look at More Than the Record

It is essential to know a fighter’s record, but it’s more important to consider their quality of competition. A fighter might have a 10-0 record, but if each of those opponents had losing records or are unrecognizable names, it’s difficult to give that fighter an advantage over an opponent who might have a worse record but has fought several tough fighters.

It’s crucial to consider both the strengths and weaknesses of each fighter in a UFC matchup. While some skills can prove unparalleled, others can be countered by different MMA specialties. See the chart below for a breakdown of the specialty of past UFC champions.

Daniel Cormier is an excellent example of what it means to be a well-rounded UFC fighter. Cormier has a great wrestling technique, good cardio, a heavy top game on the ground, superb takedown defense, sound submissions, good ground-and-pound, and excellent clinching. Because of his versatility, Cormier has more ways to attack and defend which automatically gives him the upper hand in a bout.

Positive and Negative for Specialists

The difference between being well-rounded versus being a specialist can be found with Demian Maia. Maia is a world-class jiu-jitsu artist. Rather than trying to succeed in each martial art, he’s become a specialist in jiu-jitsu. Against a fighter with poor takedown defense and weak submission defense, Maia will always be a favorite. However, if he faces an opponent with strong wrestling and excellent jiu-jitsu, it’s safe to bet against Maia.

You often hear that wrestling is the best base for UFC fighters. It would be a cliché if it weren’t true. Most UFC champions work from a wrestling base and build their skills around that wrestling. If all things are equal except for wrestling skills, it’s not unsound to favor the wrestler. Since the late 90’s wrestling-based fighters have produced 17 Champions to date, followed by Brazilian Jiu-Jitsu at 17 and boxing at 12.

If the fighters are primarily strikers or if you think they will keep the fight standing for prolonged periods, it’s vital to consider fighting stance. A southpaw stance is when the fighter’s right foot is forward and their left is back, whereas an orthodox stance is left foot forward and right back. Typically, the strongest hand will be back to give the fighter more momentum with each hit.

A southpaw stance (left-handed fighter) usually has an advantage over an orthodox (right-handed) fighter. The reason behind this is simple math. Left-handed fighters are rarer, so most fighters train against and with righties.

More Considerations Prior to Betting on UFC

Being an avid fan of the sport you’re betting on always gives you an advantage over casuals. What’s important to take away from below for a successful UFC betting strategy is that it takes a multitude of factors to help make the best picks. Knowledge is profit.

Watch the weigh-ins. If a fighter has a severe weight cut or looks especially drained on the scale, it’s never a good sign. A bad weight cut could affect a fighter’s strength, cardio and mental acuity.

Know the pace the fighters compete at. If one combatant is primarily an attacker and the other is a counter striker, the judges could favor the attacking fighter due to higher output.

Keep an eye on injury reports. If a competitor is significantly compromised or is only just returning to the octagon after an injury, take note.

Another thing to consider is the location of the fight card. If a fighter is traveling a long distance and not giving themselves time to acclimate to the site, food, and altitude, that should be considered.

One memorable incident of this occurred in 2015 when Fabricio Werdum set up camp in Mexico City for months ahead of his matchup against heavyweight champ Cain Velasquez, who arrived shortly before fight night. Velasquez’s cardio failed him at the different altitude and he submitted to Werdum in the third round, losing his title.

Betting on UFC fights might seem overwhelming at first due to the number of wagers one can place on each fight and fight card, but once you get the hang of the sport and what to look for during your research, it can be an exciting and lucrative endeavor.

Now that you know how to bet on UFC fights online it’s equally as important knowing how to choose the right sportsbook for your UFC betting needs prior to placing a wager, that’s why we have you covered. Now in the words of Bruce Buffer “It’s Time”!