After a strange 60-game season, the Major League Baseball playoff field is set with 16 teams (eight per league) beginning a best-of-three Wild Card Series round this Tuesday and Wednesday.

With no days off after each round begins and no home field advantage following the first round, unpredictability and chaos could reign supreme this October. Let’s look at the updated World Series odds at BetOnline a pick a winner.

Looking to win their first World Series title since 1988 after a string of recent disappointments, the Dodgers (+300) enter the postseason with a +136 run differential in just 60 games; for perspective, only six teams topped that mark in 162 games in 2019.

Los Angeles led the majors in runs scored and home runs, and with a rejuvenated Clayton Kershaw (2.16 ERA in 10 starts) and a healthy Walker Buehler back in the lineup and starting Game 1 against the Brewers, they have few flaws entering October.

The 2020 MLB playoff bracket is set‼️

RT if your team made the postseason: pic.twitter.com/po2ZZrMpZ0

The Yankees (+650) and Rays (+650) are co-favorites in the American League. Dealing with a myriad of injuries, New York ran hot and cold all season but sluggers Aaron Judge and Giancarlo Stanton are both healthy entering their series against Cleveland (+1400) and old friend Terry Francona.

Meanwhile, Tampa Bay is the only team in MLB with more than 20 wins against plus-.500 teams. Top-ten in runs scored and top-five in runs against, the Rays are one of the most balanced teams in all of baseball, putting together a 34-12 record after a slow 6-8 start. They begin what should be a deep postseason run against the upstart Blue Jays (+3300) on Wednesday.

CLUBS THAT COULD SURPRISE

The Twins (+1400) have not won a playoff series since 2002, losing an incredible 14 straight postseason games, but with one of the best pitching staffs in all of baseball (fourth in ERA), a shutdown bullpen, and a powerful lineup led by Nelson Cruz, Minnesota is a strong bet to represent the American League in the World Series.

Speaking of pitching, with the best ERA in the MLB (3.17) and Cy Young frontrunner Shane Bieber, the Indians (+1400) have an excellent chance to beat the Bronx Bombers in the best-of-three Wild-Card. They are currently +110 to win the series at BetOnline. The White Sox are also at +1400 to win the title, but have lost six of eight entering the postseason.

“I think we’re a fucking nightmare. And I think everybody knows that.”
– Joey Votto@Starting9

Over in the senior circuit, the Padres (+1000) and Braves (+1200) are viewed as the best bets to knock off Los Angeles. Atlanta’s offense scored only one fewer run than the league-leading Dodgers this season, but the pitching rotation is a concern beyond Max Fried. They’ll also have their hands full with Cincinnati (+1800) in the first round.  Winners of 11 of their past 14 games, the Reds have the best rotation in the majors with NL Cy Young favorite Trevor Bauer, Luis Castillo, and Sonny Gray.

Scoring the third-most runs in all of baseball, San Diego was one the season’s most fun stories, but with injury question marks surrounding staff ace Dinelson Lamet and new acquisition Mike Clevinger entering their series with the Cardinals (+4000), the Padres are one of the riskiest bets on the board. 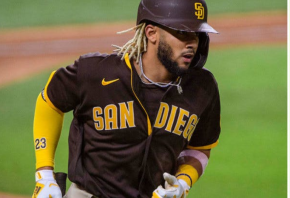