The Group Stage of the Champions League is wrapping up, and a fair number of the big names are at risk of an early elimination. Spurs are third in a tough group and will have to close a three-point deficit in their final two games against Inter Milan and Barcelona. Napoli, PSG, and Liverpool are locked in the same group, fighting for just two qualification slots.

Manchester City remains the clear favorite to win outright, but is there value in picking them at a short +300 odds? Let’s dive into the numbers.

There are few surprises here. Manchester City (+300) started the season as favorites to win the lot, and their stellar performances so far gives the oddsmakers no reason to demote them. City are currently undefeated in the Premier League and expected to sail through the Champions League group stage, despite their upset 2-1 loss to Lyon at the Etihad.

Barcelona (+500) are not close behind the favorites. They’re on track to top a tough group that includes Inter and Spurs, and they’re now second in La Liga after a shock loss to Real Betis and a draw to Atletico Madrid. It’s been a mediocre season so far by Barca standards, but they’re still fielding one of the best squads in the world.

Cristiano Ronaldo scores in three straight matches for Juventus for the first time since joining the club. pic.twitter.com/2TFytmNU7E

Ronaldo’s Juventus (+550) is looking like a squad ready to end their 22-year Champions League drought. They’ve reached the finals on five occasions since their 1995-96 win, but have lost each time. Ronaldo has proved his worth time and time again this season, and could be just what Juve needs to take them to UEFA glory.

Borussia Dortmund (+3300) are, once again, being overlooked by the oddsmakers. The perennial underdogs are currently leading the Bundesliga and recently posted an impressive 3-2 win over Bayern Munich. As always, their roster doesn’t compare favorably to the bigger clubs, but they have a reputation for punching above their weight.

Perhaps also give some thought to Manchester United (+2800). Now before you start laughing and bring up the fact that they’re seventh in the Premier League and on the verge of sacking their manager, keep in mind that Jose Mourinho has a long history of Champions League success. The 2-1 win against Juventus in the last round is a prime example of that. Juve were the better side, with more possession and goal-scoring opportunities. But Mourinho still emerged victorious.

The fact that Bayern Munich (+900) are still being held in such high regard is baffling. The 28-time Bundesliga champions are currently fifth in the domestic league, and were last held to a draw by the relegation-threatened Fortuna Duesseldorf. Their Champions League campaign has been far more successful, but that’s mostly due to their easy group.

The Real Madrid (+1000) train wreck has truly been a sight to see. The departure of their manager and star player last season shouldn’t have had such a disastrous effect on such a stacked side, but los Blancos have looked completely lost this season. They’re currently sixth in La Liga with just two wins in their last eight fixtures. In the Champions League they’re level with Roma and should comfortably advance to the knockout stages.

And of course there’s Paris Saint-Germain (+1000). The French giants are topping Ligue 1 — obviously — but once again they could be headed for another embarrassing Champions League implosion. This time they may not even advance past the group stage. They’re currently third in their group, below Napoli and Liverpool, and both Neymar and Mbappe are nursing injuries. 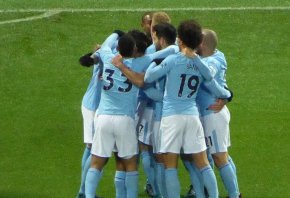