Everybody was wondering how the Spurs were going to handle the beating they took in game 2, well, they had a pretty good answer.  Game four of the NBA finals between Heat and Spurs is this Thursday at 9 PM ET at the AT&T Center. 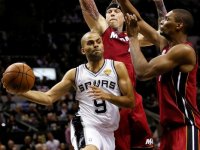 San Antonio smashed Miami 113-77 on Tuesday with 16 three pointers as Danny Green scored 27 points in the night.  It was a great showing that as game 2, doesn’t necessarily reflect the reality of the series.

“It shouldn’t be a surprise,” Spurs coach Gregg Popovich said. “These are the last two teams standing. I don’t think either one of them is going to get down if they have a bad night.”

Lebron James had a poor game; he didn’t attempt a free throw all night and most people think it was his worst game of his postseason career. “Honestly, I just have to play better,” James said. “I can’t have a performance like tonight and expect to win.”

LeBron James went 2 of 14 on field goals outside the paint in Game 3.

Gary Neal was another player with a huge game; he scored 24 points and was outstanding in all facets of the match.

“It’s a dream come true,” Neal said. “Me and Danny both went through a lot of stuff together. We were guys that showed up two hours before practice started to get shots up and to prove to the coaching staff that we belong, and we’re going to do whatever we need to do to get minutes.

The Spurs are -2 point favorites for game four in the NBA finals odds, but Tony Parker is listed day to day with a Grade 1 right hamstring strain.