FanDuel sportsbook is part of the FanDuel American gambling company, offering a sportsbook, daily fantasy sports betting, horse racing, and the FanDuel casino. The company operates in various states across the United States. It is one of a few American bookmakers that deal with the NFL as an official betting partner.

The company was founded by Nigel Eccles, Lesley Eccles, Tom Griffiths, Rob Jones, and Chris Stafford on July 21st, 2009, in Edinburgh, Scotland. Back then, the company was known as HubDub, a news prediction site. The FanDuel sportsbook you see today has come a long way, with the company valued at around $15 billion. 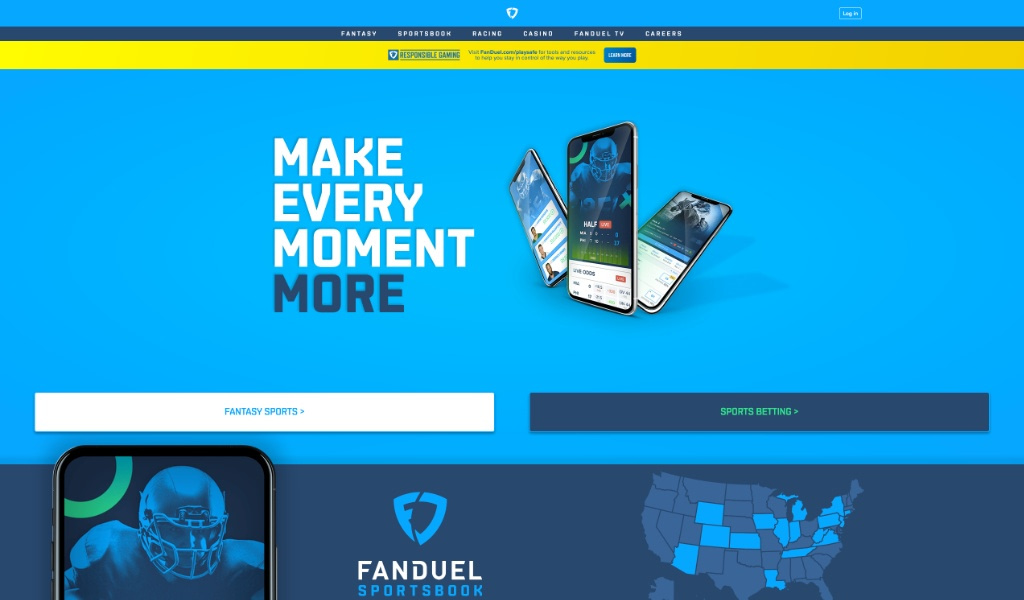 The company’s growth has been steady, with various investment rounds occurring between 2009 and 2022. FanDuel sports betting has grown on the back of the hard work of its founders and several successful funding rounds. Given the changing betting landscape in the United States, new opportunities have opened up for the company, and now they boast several deals with major U.S. sports leagues.

One of those deals was signed in 2018 when the gambling firm announced a multi-year deal to become the official sports betting partner and official daily fantasy sports partner of the National Hockey League. The deal was announced on the same day that FanDuel became the official team sponsor of the NHL’s New Jersey Devils, including in-arena sponsorship for the FanDuel sportsbooks and brand integration through various other channels.

In 2018, the U.S. federal government amended sports betting laws, giving several companies the green light to start operating. The FanDuel sports betting platform was one of these and are now operational in 16 different states. The states that allowed FanDuel retail betting are listed in the list below.

Fanduel Mobile Betting per US State

U.S. sports fans and bettors can move through the various FanDuel betting lines, which cover a broad range of markets. The focus is on the six major professional North American sports, though you can also wager on international markets. The complete list of sports betting markets is as follows:

FanDuel runs on the OpenSports engine, which Scientific Games sold to UFC owner Endeavor. The company is owned by Flutter Entertainment, who have a great deal of experience working with betting sites, operating leading sites such as Paddy Power, Betfair, and SkyBet. The focus is on major US sports leagues, but this platform also gives access to lower-league US and European sports markets.

The basketball, football, and hockey sections offer access to sports betting markets across the globe, including major leagues like Euro League Basketball and Canada’s CFL. The website and mobile app also feature a parlay builder, allowing you to create your bets.

The desktop version of FanDuel is simplistic but gets the job done. Players can access the markets through the extensive betting lines at the screen’s top. The bet slip takes a reasonably long time to fill out, especially when making single wagers! Overall a fairly solid betting system has captured the attention of some American bettors.

FanDuel offers a complete mobile betting app with hundreds of thousands of reviews, offering mixed reviews overall. As a modern sports betting app, customers can access the odds via iPhone or Android. The mobile version of FanDuel allows you to switch quickly from the FanDuel casino to the sportsbooks within seconds.

You can also access the most popular markets, which are the live betting markets. Of course, you can access the in-play markets using the website, but the FanDuel app makes things easier and helps you to find the best for you.

FanDuel’s customer service is straightforward and has received mixed feedback over the years. Many of the issues have been quickly resolved, but there have been several customers that have complained about the quality of the service daily. The live chat waits are exceptionally long, but the FanDuel email option has a reasonably quick return time.

The phone and live chat options generally fit into the industry norms, and the customer service representatives are attentive, focusing on being helpful and friendly. The quality of service sits at about the same level as the other available bookmakers in the United States.

FanDuel was founded in 2009, offering a range of sports betting options—including daily fantasy sports, horse racing, and the FanDuel casino—which have boomed since the gambling laws changed in states throughout the USA.

Can I wager on FanDuel via mobile?

The provider has developed an innovative mobile betting app—available for iOS and Android users—providing users with access to a range of betting markets on the go.

As a leading US sports betting provider, customers can access a range of live/in-play betting markets. Not only for major US sports leagues but also sports leagues and tournaments across the globe.

Can you wager on the Super Bowl in the FanDuel sportsbook?

The Super Bowl is one of the world’s most popular sports betting markets, and given that FanDuel is a popular bookmaker in the United States, it’s no surprise that FanDuel offers a broad range of betting options for the event.

Does FanDuel also offer a casino?

As with many of the top providers in the United States, the FanDuel service comes included with a casino. The casino comes complete with, Slots, Live Casino, Jackpots, Blackjack, Roulette Table Games, and much more.

As part of adjusting to the ever-changing betting landscape, customers at FanDuel will be able to withdraw and deposit funds into their sports betting accounts using BitPay, which allows customers to deposit using major digital currencies such as Bitcoin (BTC).
Terms & Conditions