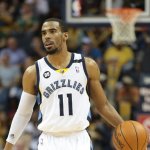 The loss was the fourth straight for the Blazers against the Grizzlies; if Portland wants to break that trend and make a series out of it, they better start shooting. The Grizzlies held the Trail Blazers to 33.7-percent from the floor, with Damian Lillard hitting only five of 21 shots (including missing all six of his attempts beyond the arc).

It wasn’t so much the stat line that had Lillard concerned after the game, though.

“Four out of the first five misses were halfway down, so they felt good,” Lillard said. “I felt good out there. I think it was just a game where we got outplayed and we weren’t good enough offensively or defensively to win the game.”

As for the Grizzlies, the team is hoping Mike Conley can keep playing through pain. The guard is dealing with a sprained right heel that saw him sit out the entire fourth quarter (once the outcome was all but decided).

“It’s going to flare up no matter what I do,” Conley said. “I just go out there and play as if I’m not injured and see how much I can do and what I can do to help the team and the following day is just rehab and recover.”

Despite the injury and limited playing time, Conley still scored 16 points in the win.

“I expect a lot out of him to be honest with you,” center Marc Gasol said of Conley. “He’s my little man. He’s a great player, great guy. I knew he wasn’t going to miss a playoff game. I can only ask him to give me whatever he has, and he’s done it. And I’m going to ask the same next game.”

While it may not be an Isiah Thomas-sprained-ankle type of affair, Conley playing through the pain has been impressive.

“Mike is a guy that I got a lot of respect for,” Lillard said. “For him to still come out there Game 1 for his team and play through it, I know how it feels to be banged up and have to chase guys over pick and rolls and use pick and rolls and make plays. You’re kind of the guy that’s moving around the most. He’s out there doing what he has to for his team.”

Tonight, look for Lillard and company to find their groove and keep it close. That’s why Portland and the points (+6) is the play.