On Saturday, December 19, Saul “Canelo” Alvarez looks to add two more titles to his collection of belts when he meets Callum Smith at the Alamodome in San Antonio, Texas.

Smith, who sports a perfect 27-0 record, is the defending WBA (Super) and The Ring super-middleweight champion. Those belts will be on the line when he faces Alvarez in Texas. Smith is coming off a November 2019, unanimous decision win over John Ryder.

What’s most interesting about this matchup is the size of the fighters. Alvarez is 5’8″ while Smith is 6’3″. As for reach, Smith has an eight-inch advantage in that department. With everything else being equal, those advantages would normally make Smith the favorite. Not everything else is equal.

Alvarez is the No. 1 pound-for-pound fighter in the world according to The Ring. He also has 29 more fights than Smith and Alvarez has had a much tougher schedule than Smith, who is 30, the same age as Alvarez.

Smith’s physical advantages will play a role in this fight, but I do not think they will make a tremendous difference once Alvarez gets comfortable.

Prediction: Alvarez at -550 at SportsBetting.

Thanks to the size of his opponent, Alvarez is going to spend a lot of the time on the outside. His best bet is going to be to use his speed to blitz in and out with his punches. With that, I don’t think Alvarez will add another knockout win to his record. Smith’s height will give Alvarez a big target to land his body blows. I think once he establishes that attack, Alvarez will slow down Smith and take control of the fight. My feeling is that it will take Alvarez time to establish himself and that will result in him earning a decision win.

Pick: Alvarez via decision -585 at Bookmaker.

Alvarez has the edge everywhere in this fight except for height and reach. He’s the harder puncher and the better overall boxer. The fight will come down to how fast and how well he deals with the height and reach of Smith.

TALE OF THE TAPE: TYSON vs. JONES

There has been talking of a possible third fight between Gennady Golovkin and Alvarez, but Alvarez said that if he defeats Smith he wants to stay at super middleweight and unify the titles in that weight division. A win gives Alvarez many choices, all of which should be very lucrative for him.

A Smith win would be huge. With the only loss on Alvarez’s record coming to Mayweather, it would be a monumental achievement if Smith defeats Alvarez. 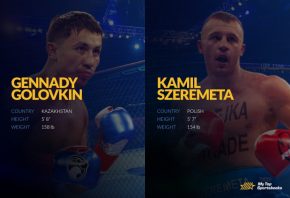