The NBA is a week and a month away from starting a new season, but it’s in the news – and this time not from the real contenders Miami or Los Angeles.Ex New York Knicks guard Stephon Marbury mentioned current Knicks stars Carmelo Anthony and Amare Stoudemire are not a good fit together. 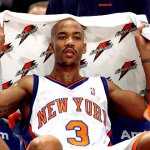 “Amare needs a point guard like Steve Nash (to thrive). He’s a pick-and-roll guy, a pick-and-pop guy. He can’t play in the half court where everything’s slowed down,” Marbury told ESPN New York.

“I don’t know if (Knicks owner James) Dolan brought him (Carmelo) in to win games or to make money,” Marbury said. “I think it was to make money”.

The Knicks are currently listed at 30/1 to win the NBA championship, but most people think they don’t have the tools to compete against teams like the Heat, Thunder of the Lakers; they are not in the same class.

“I think they have a good team,” Marbury said. “They could make the second round (of the playoffs)”.

Marbury played with Stoudemire in Phoenix during the 2002-03 season, but failed to look good, also.

New York lost to Miami last season in the postseason and looked flat most of the series, most of their issues last year where because of team chemistry, which is exactly the problem with Amare and Carmelo.

Also, the rest of problems came because of the personalities united in the locker room, for example, JR Smith, who is a great shooter, but he could get a little crazy at times.

“I think anything is a bargain with me, whether I’m playing for a dollar or $20 million it’s a bargain because I’m going to play hard no matter what,” Smith told SNY.tv. “No matter how much I get paid, it will never affect how hard I play, and I think that should be thought about when people see me next year.”