Enough with the talks, and comparisons; the USA basketball team starts his road to the Goal Medal at the Olympics facing France this Saturday at 9:30 AM ET at  the Basketball Arena in London (the game will be broadcast on NBC.) 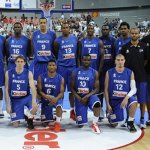 The US won the four they played during their preparation, including the 100-78 win over Spain, which is the matchup everybody is waiting for the final. Game high 27 points from Carmelo Anthony  and 25 more from LeBron James  made the USA team not only win the match, but also covered the spread.

“I thought we played extremely well. Carmelo (Anthony) was sensational. I thought his play in the first quarter and second period was the difference in the game,” said coach Mike Krzyzewski.

“Carmelo kind of kept us in it and our bench kept us in. We got a really good performance from Kevin Love – double-figure rebounds. We shared the ball well in the second half. We were very pleased with the win.”

In the four games the USA team used as preparations for the Olympics; they went 2-2 against the spread, covering against Dominican Republic and Spain, and failing to cover against Argentina and Great Britain.

“I think we came out a little bit too focused, a little bit overzealous at the beginning, and they jumped on us quick,” remarked Anthony after the win against Spain. “They came out with a lot of intensity and got  some easy shots, easy baskets. Once we settled down and made a couple plays defensively, got back to our comfort zone, we didn’t look back from there.”

Three of the Croatian players are in the Spanish League, and the rest are spread around Europe; not one is in the NBA. The USA basketball team is 38 points favorites in the betting odds.