After failing to cover the biggest spread in basketball history against Tunisia, the USA team will face the darkhorse Nigeria this Thursday at 5:15 PM ET. The Americans are 42 point favorites with the game total set at 168. 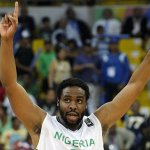 The US team was a 55 point favorite over Tunisia but failed to cover even as they destroyed them 110-63 on Tuesday, with 16 points apiece from Kevin Love and Carmelo Anthony.

“My goal tonight was to try to get kind of equal number of minutes for everybody in the game and to try some different combinations so there was really nothing meant by subbing five at a time except to get five new guys in and get a certain amount of minutes for each of them, and like in Andre’s case, he hadn’t gotten as many minutes,” said USA head coach Mike Krzyzewski.

“Kevin Love is continuing to improve so we wanted to make sure he got his minutes. Anthony Davis. James Harden. Those guys got extended minutes. And it’s better to have extended minutes sometimes if you go in with a new unit, and so that was the only significance of any unit substitutions that I did.”

Nigeria beat Tunez by four points on their debut but lost 72-53 to Lithuania on Tuesday. The Africans are the Cinderella story because they weren’t supposed to be in the tournament, but they managed to get the qualification by beating teams Venezuela and Greece.

The Americans are obviously more talented, but I don’t think they will be able to cover the 42 points.