When & Where: Sunday, February 20 at Rocket Mortgage FieldHouse in Cleveland, Ohio

The 71st NBA All-Star Game takes place on Sunday at Rocket Mortgage FieldHouse in Cleveland, Ohio. The two players who led the fan voting in the respective conferences – LeBron James and Kevin Durant were named team captains. James and Durant then picked their teams from the pool of players who were selected as starters before moving on to picking the reserve players for their teams.

James and Durant were also the captains for the 2021 NBA All-Star Game. Team LeBron won that game by a score of 170-150. Giannis Antetokounmpo took home the MVP award with a 16-for-16 shooting effort and a total of 35 points.

The 2022 NBA All-Star Game marks the fifth year in a row where the NBA has used the current format. James has captained his team in each of those years. He is 4-0 heading into the 2022 matchup.

Before we look at the teams, please check out our NBA All Star Betting guide and the best sites to bet on the NBA. 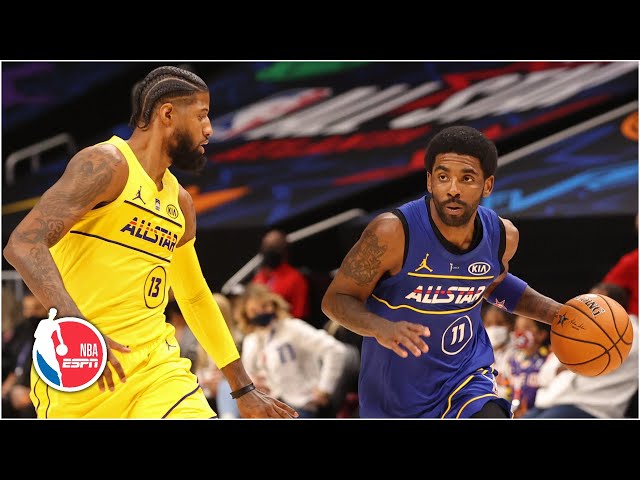 On paper, LeBron James has the better team. James has four NBA MVPs in his starting lineup and the one player who is not a former most valuable player, DeMar DeRozan, is in the mix to win the award this year. DeRozan is fourth in the NBA in scoring with 27.9 points per game. As for scoring prowess, Team LeBron also has the league’s leading scorer in Giannis Antetokounmpo 29.4), while James checks in at third in the NBA with 29 points per game. Steph Curry is the top three-point shooter in the league with 4.7 three-pointers per game.

If Team LeBron looks familiar, that’s because James elected four of the five starters as starters last season. The only new starter is DeRozan, who replaced Luka Donic. Donic is on Team LeBron as a reserve this year.

Kevin Durant might be the captain of Team Durant, but he will not be playing in the 2022 NBA All-Star Game as he recovers from an MCL sprain.

Unlike James, Durant’s starting team looks very different this year as Jayson Tatum is the only starter to return to Durant’s roster. Joel Embiid is having the type of season that will put him in the running for the 2022 NBA MVP. Embiid is hot on the trail of league leading scorer, Giannis Antetokounmpo at 29.3 points per game. Trae Young is fifth in scoring at 27.9 points per game. Ja Morant checks in at No. 7 on the lust of NBA scoring leaders with 26.4 points per game. Morant, like Embiid, is a legit threat to claim the MVP award this season.

If this were a series, Team Durant would be worth considering because of how much younger they are than Team James. Team Durant is also a better defensive club and they have a size advantage, especially when it comes to the reserves.

I expect Team LeBron will make it five straight wins in the All-Star Game.

See below the best online sportsbooks where you can wager online and choose the best one for you: