Two Western conference teams that could use a win meet this Monday night as the Houston Rockets challenge the Utah Jazz, at 9 PM ET at Energy Solutions Arena. 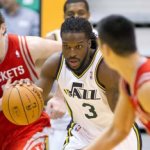 The Rockets have won two in a row and three of the last four but just a few days ago they were in a seven game losing streak, so it’s better to wait before trusting them. Houston beat the Brooklyn Nets on Saturday 119-106, as James Harden scored 29 points, Chandler Parsons added 16 points.

“We weren’t doing what we were supposed to do,” Jeremy Lin said. “The coaches showed us a few days ago what we can look like. That was a nice reminder to all of us.”

“We were just trying to make it difficult (on Williams),” Lin said. “We had extra guys coming in to protect on when he would drive. We just tried to load on him real.

Also on Saturday, Utah beat a great team like the Pacers 114-110 with 25 points by Al Jefferson. “They still made it tough,” Jefferson said. “Even when we thought we had the game won, they made something out of nothing every time.”

Utah will be a 3 point favorite in the NBA lines; keep in mind the Jazz has covered three of the last four games against the Rockets.