Every night at bath time, my two-year-old son and I go through the same rigamarole. He is adamant that he does not want to get in the tub. I try to convince him, gently at first, that washing away the germs from daycare is a great idea. I entice him with toys, balls, tupperware … anything that floats. Eventually he either acquiesces or I pull rank; either way, he winds up in the bath. To his credit, he makes the best of it. He makes the best of it too damn well, actually. He ends up having a great time and I have to go through a similar process to convince him to get out.

The same dynamic now exists between me and the NBA. I cried (perhaps literally) when the season ended and we were staring down the barrel of four long, basketball-less months. But then I got into the offseason tub, tried to make the best of it, and holy crap was it fun! It was the real-life version of button-mashing in the GM mode of an NBA video game. Paul George and Carmelo Anthony to the Thunder; Chris Paul to the Rockets; Isaiah Thomas to the Cavs; Kyrie Irving and Gordon Hayward to the Celtics. There was more star movement than the Perseid meteor shower.* Throw in the endless entertainment provided by the entire Ball family, plus a developing feud between two of the biggest names in the sport and the sitting President of the United States, and I don’t want to get out. I want this offseason bath to last forever. I want every player to be traded multiple times but never actually don a new jersey. I want them to be traded for other players, for cash, for fake Twitter accounts.

Alas, nothing gold can stay, and the start of the 2017-18 season fast approaches (Oct. 17). Now I’m trying to convince myself that the regular season will be as enjoyable as the offseason. That should be the case, at least at the start of the year, when we get our first taste of the newest superteams and a continuing power-struggle between President Trump, Steph Curry, and LeBron James.

Do any of those new superteams have a chance at knocking off the Warriors? Will LeBron remain a Cavalier? Will any players do the unthinkable and side with Trump in the ongoing war of words between POTUS and the NBA’s stars? Odds on all of that and more are below for your prognosticatorial pleasure.

*Do not come at me with your “shooting stars aren’t actually stars” takes.

The Warriors remain the odds-on favorites to win the 2017-18 NBA Championship, but they are facing a much more difficult route to the finals than ever before. In spite of all the superteams forming in the West, the top contender to take down the reigning champs remains the San Antonio Spurs — or just Gregg Popovich, if you prefer.

Keep in mind, the Spurs were up 78-55 in the third quarter of Game 1 of the Western Conference Finals last year before Kawhi Leonard was forced to leave the game (and series) with a foot injury. If Leonard had been healthy, the Warriors and Cavaliers may not have had the opportunity to break their tie in the finals. San Antonio returns the majority of their roster, while adding Rudy Gay and Derrick White.

The Spurs are no longer the only team in the conference Golden State has to worry about. The Rockets already boasted a stunningly efficient offense, and have now added one of the best point guards in the league in Chris Paul. The nine-time All-Star will be able to share the primary ball-handling duties with James Harden, and help cut down the turnovers, an area where Houston struggled last year (23rd in the league). Paul is also a terrific defender, having appeared on nine All-Defensive teams in his career, as is fellow newcomer PJ Tucker, a hard-nosed wing. If Mike D’Antoni can get Harden to defend and still be an elite scorer without the ball, the Rockets are going to very tough.

After adding Paul George and Carmelo Anthony to a roster that already featured Russell Westbrook, the Thunder have the second-most star-power in the West. The issues will be getting a consistent defensive effort out of Melo and finding a way to get Russ and Melo to share the rock. If the three can build chemistry quickly, OKC will be a very dangerous team.

Oh yeah, there’s that whole Eastern Conference, too. The Cavaliers likely won’t have Isaiah Thomas on the court until January, and will need one of Derrick Rose or Dwyane Wade to resurrect their All-Star selves to stand a chance against the Warriors in the finals. The Boston Celtics have a legitimate shot at taking the East from LeBron this year, but will need Jayson Tatum to play like a Rookie of the Year candidate to do so.

Kawhi Leonard and LeBron James stand out above the rest, as they are the undisputed leaders of teams likely to finish near the top of the West and East, respectively. Russell Westbrook is now going to have to share the ball with Paul George and Carmelo Anthony, while James Harden splits the PG duties with Chris Paul.

The darkhorse here is Giannis Antetokounmpo. Everything the Bucks do on both ends of the floor flows through the “Greek Freak.” If he can lead Milwaukee to a top-three finish in the East, the voters will certainly appreciate the fact that Antetokounmpo isn’t surrounded by other All-Stars.

Though I don’t expect Lonzo Ball to continue grabbing rebounds at the rate he did in Summer League, he will be relied upon to quarterback the Laker offense.

Ben Simmons may be the better talent, but he’s surrounded by more talent than Lonzo, including other players who excel with the ball in their hands, namely fellow rookie Markelle Fultz. Add in a dominant big who demands touches in Joel Embiid, and the 76ers are going to finally have a respectable squad, making it tough for either Simmons or Fultz to shine brighter than the rest.

Averaging a triple-double requires two main things: first, you need to possesses almost superhuman athleticism and skill; second, you need to have an insanely high usage rate. With Isaiah Thomas injured and Kyrie Irving gone, LeBron James shades in both those boxes much darker than any other player. His playoff performances demonstrate that he can basically go for 25-10-10 whenever he wants. Whether he decides to exhaust himself like that in the regular season is the real question, a question that has been answered with a definitive “no” in recent years.

Don’t expect Russell Westbrook to repeat his triple-double average from last season. The Thunder are no longer the Russ show.

Odds to be the first coach fired

The Indiana Pacers could only manage 42 wins last season with Paul George. Without him, things could get ugly, quick. Making the playoffs in a  weak Eastern Conference will still be the franchise’s goal — because the owner loves that extra money — and McMillan will likely serve as the scapegoat if/when the Pacers aren’t on track to do so.

Alvin Gentry has been under a lot of pressure to produce wins in New Orleans since he was hired in 2015. He was given a pass in his first season because Anthony Davis missed 21 games, but he failed to get the Pelicans into the playoffs last year with The Brow on the floor for 75 games. If Gentry can’t find a way for Fire and Ice (i.e. Davis and Demarcus Cousins) to work, New Orleans will be forced to make changes. 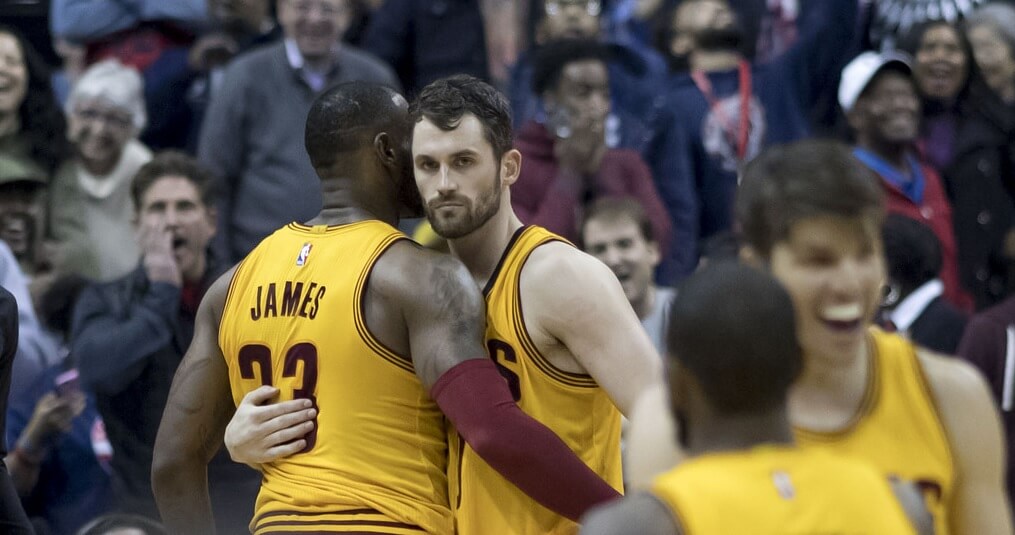 With Kyrie Irving gone, best-buddy Dwyane Wade coming in, and the Cavs sporting a deeper roster on the whole, this has the potential to be a very enjoyable season for James in Cleveland. Even if Isaiah Thomas is severely limited by his hip injury, the Cavs are going to roll through the depleted East — at least until they matchup with Boston. The rumors have long swirled that James is headed to the City of Angels sooner rather than later, now that he’s delivered Cleveland its title. But 2018-19 is too early. The Warriors will still have their Monstars-esque superteam together; the Rockets will still be trotting out the best backcourt since Isiah Thomas and Joe Dumars; and the Spurs will still be helmed by Gregg Popovich (meaning they could win 55 games with Kawhi Leonard and 12 garden gnomes). If there’s one thing we know about LeBron at this point, it’s that he doesn’t make things harder than they need to be. Based on past “decisions,” it’s more likely that he’ll stay in Cleveland for another year, giving the Lakers some time to grow their young core and giving the Western Conference powers some time to sow dissension in their ranks.

Or maybe he’ll say “screw it” and sign with the Warriors for a lifetime supply of Trix.

Since the 2018 title is likely going to the Warriors or Cavs, the odds are long that the champs reinstitute the White House-visit tradition. There’s always a chance Steph Curry, LeBron James, and Donald Trump start to play nice and find common ground. But I’m using “chance” the way Jim Carrey does in Dumb & Dumber.

Odds any NBA player tweets in support of Trump this season: 40/1

Unfairly lumping everyone together for a moment, NBA players are not shy about sharing their stance on controversial topics on Twitter. Portland’s Al-Farouq Aminu tweeted horrifically homophobic comments a few years back. Amare Stoudemire commented on the racial elements of the rape allegations against Ben Roethlisberger. Once upon a time, Damian Lillard even came after the King. Yet it’s still borderline unimaginable that anyone in the Association will tweet in support of Trump. Even if the odd player does sympathize with the prez, publically supporting Trump would get you ostracized from your locker room faster than Kyrie Irving at an astronomy convention.

Odds Trump tweets in support of any current NBA player this season: 4/1

While still a longshot, this is a lot more likely. I could definitely envision Trump tweeting in support of one player as a means of undercutting another. Something along the lines of: “LeBron James is so overrated. Kyrie was the real 2016 Finals MVP!” Incidental support is still support, right?

LeBron James: 5/1
Steph Curry: 5/1
Michael Jordan: 15/1
Trump loves calling people “overrated.” But if he was going to tag any of these superstars with the label, he probably would have done it already.

Limiting this to his inner family circle (Melania, Tiffany, Donald Jr, Eric, Ivanka, and Jared Kushner), I don’t see it happening. The Trump crew generally paddles in the same direction, like one giant, misguided flock of voyageurs hunting for beaver pelts in the tundra.

If the backlash grows loud enough, Trump could try to quiet critics by arranging a meeting with one or some of the more socially active players, like Chris Paul, the head of the Players Association. Considering Trump’s general approach to his critics, though (i.e. not giving them the time of day), the fact that Paul has been vocal about his displeasure with POTUS decreases the likelihood.

The NBA Hall-of-Famer is putting his legendary hustle to work as a diplomat, offering to help Trump instigate a detente with North Korean leader Kim Jong-un. The odds are incredibly long. But that’s not a dig at Rodman’s statecraft; it’s a reflection of the fact that the Worm — a person who once kicked a cameraman in the groin, a person who once tried to marry himself — is the most level-headed of the three parties that involved.