Two of the best Eastern conference teams, Miami Heat and Atlanta Hawks, clash this Sunday at 7 PM ET
at Philips Arena, in what should be a thrilling match.

The Heat, the second best scoring team in the NBA will take their third of seven games on the road
they have play over the next two weeks. Miami has recorded five of their seven losses on the road this
season, meaning this game, and this month, won’t be an easy one for them.

However, keep in mind the Hawks lost three games in a row at home this week against Memphis,
Philadelphia and Phoenix, all of those by at least a nine point’s differential. 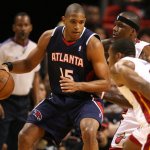 The Hawks and the Heats opened the year playing each other in two of the first three games of season,
with one victory for each team; curiously, in both cases the away team won the contest. In the last game
Miami beat Atlanta 119-116 in triple overtime as Chris Bosh stole the headlines scoring 33 points.

“That game, the way it went down in the end, was an exercise in absolute endurance and mental and
physical toughness,” Hear coach Eric Spoelstra said right after that victory. “Both teams played their
hearts out there at the end.”

“There was a total, total mental letdown,” Hawks coach Larry Drew said. “I didn’t see the sense of
urgency I saw in Miami (the first game of the season),” Drew said. “The tendency is to let your guard
down, and we certainly did tonight.”

My pick: Take the Heat.