For bettors interested in Boston Bruins betting, My Top Sportsbooks is here with our guide to betting on one of the NHL’s most storied franchises. Here, we will discuss different types of Bruins bets, provide an overview of Bruins odds, and get you connected with the best NHL betting sites. Be sure to check out our guides for other NHL teams odds as well.

What better place to begin than by looking at the Bruins’ odds to win the Stanley Cup! The Bruins are regularly a strong Stanley Cup competitor; historically, they’ve built their team around talented goaltending, strong defensive play, and physical forwards who impose their will on opponents. Their style of play is well-suited for deep playoff runs. From 2010-2019, Boston won 13 playoff series. They were the Stanley Cup champions in 2011, and they lost in the Cup Final in 2013 and 2019.

The Bruins compete in the NHL’s Atlantic Division, along with the Buffalo Sabres, Detroit Red Wings, Florida Panthers, Montreal Canadiens, Ottawa Senators, Tampa Bay Lightning, and Toronto Maple Leafs. Since the 2007-08 season, the Bruins have missed the playoffs just twice, so they are consistently a safe bet to make the playoffs. Keep an eye on their playoff odds on the table below.

How to Read Bruins Betting Lines

Whether you’re looking for the Bruins’ odds to win a single game, a player prop bet, or a Stanley Cup futures bet, never fear – we’ve got you covered! There are more ways to bet on the Bruins than you can shake a stick at. While NHL betting may seem intimidating at first, reading Bruins betting lines will become natural in no time.

We’ll start with the bet that takes place over the longest time period, the Stanley Cup futures bet. When looking at the Bruins’ Stanley Cup odds, you may see a number next to the line that reads, for example, “+ 400.” In that example, a $100 bet on the Bruins would win $400 if Boston won the Stanley Cup, resulting in a $500 total payout. The higher the number after the “+” sign is, the less likely it is that Boston will win the Cup.

If the Bruins are particularly good and the Bruins become the favorite to win the Stanley Cup, the symbol next to the betting number may switch from “+” to “-.” For example, the future betting odds may read “Boston Bruins -175.” In that case, a bettor would need to wager at least $175 to win $100 on their payout. 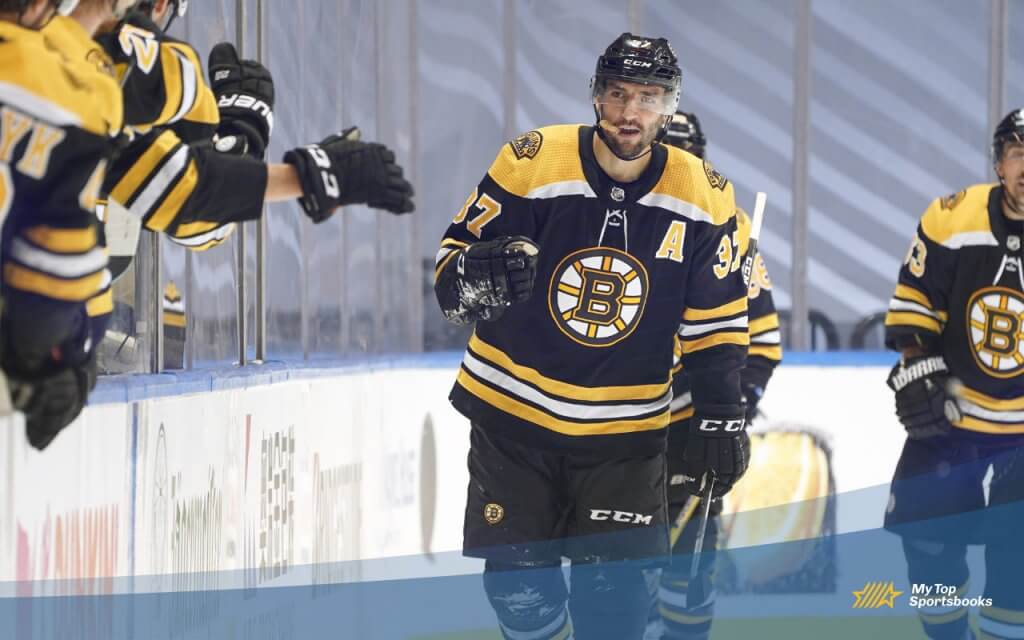 The higher the number is, the more money is involved. You’ll just need to remember to watch the signs. A “+” sign means potential for a bigger win, and the “-” sign means you’ll need to invest more money upfront if you want to score a nice payday.

Odds lines are similar for player prop bets. Boston Bruins Prop bets involve betting things like if a Bruins player will score a goal, which team or player will score first if a goaltender will record a shutout, and much more. Those odds are listed the same way.

For that example, a line might read “David Pastrnak to Score (anytime): +210.” If Pastrnak scores a goal at any point (other than in the shootout), a $100 bet would win $210 and payout $310. It is incredibly rare to see a player with a “-” symbol in front of their odds to score unless it is some sort of special event (such as the All-Star Game), but if you do see this symbol in front of a player prop bet, you should probably avoid it, as there isn’t nearly the same potential to win big.

What is Puck line? 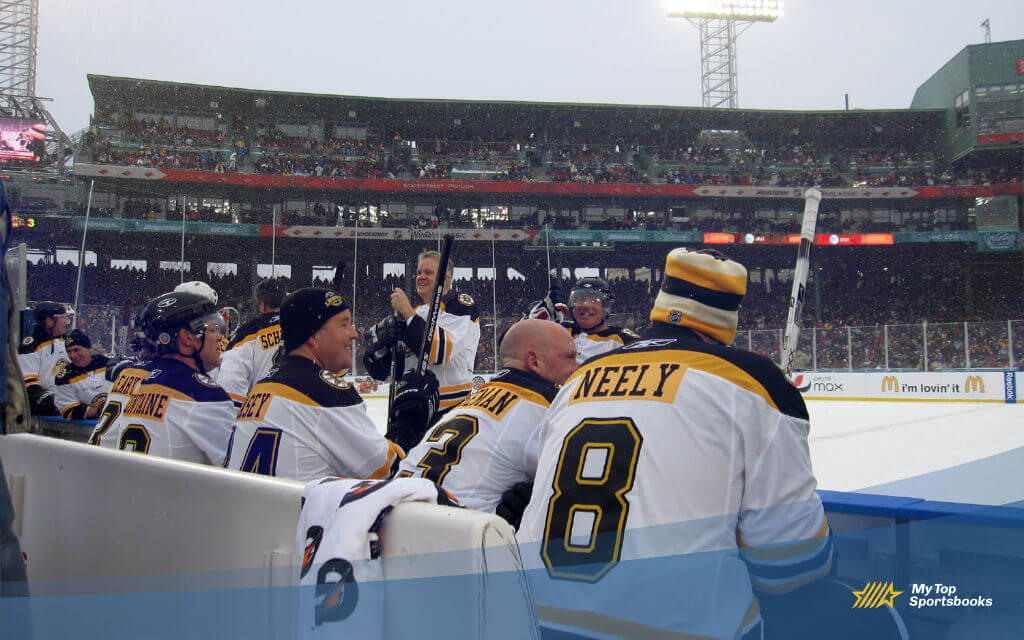 Which recent Bruins players have a shot to make the Hockey Hall of Fame?

Defenseman Zdeno Chara has a very good chance to make the Hall of Fame. A seven-time All-Star, Mark Messier Leadership Award Winner, Norris Trophy Winner, Stanley Cup champion, and international hockey icon, Chara ranks 30th on the all-time defenseman scoring list and should be a lock to make the Hall. Although he is no longer with the Bruins, he will forever be part of the family.

Center Patrice Bergeron is another strong candidate for the Hall of Fame. He’s been one of the league’s best two-way centers throughout his career and is a four-time winner of the Selke Trophy as the league’s best defensive forward (tied for the most wins all-time). Bergeron is also a member of the Triple Gold club, having won an Olympic Gold Medal, a World Championship gold medal, and the Stanley Cup. Only 29 players ever have earned that accomplishment.

Goaltender Tuukka Rask has a solid case as well with both strong NHL and international play. Rask is a Vezina Trophy and Jennings Trophy winner, a two-time All-Star, and the NHL’s all-time leader in save percentage. By the time he retires, he will likely be the winningest Finnish goaltender of all time as well. He has recently left the Bruins, but is still on his way to the Hall of Fame!

We love BetUS, Bovada and BetOnline for NHL betting!

Who has the highest Boston Bruins odds?

It depends if you’re looking for player props, futures or pre-game odds. Shop around on gamedays to make sure you’re getting the best value for your money. The three sites we mentioned above would be good places to start.

Are the Boston Bruins an “Original Six” team?

The Bruins joined the NHL in 1924, which makes them the oldest team in the United States and the third-oldest team overall. They are a member of the “Original Six” teams, joining the New York Rangers, Toronto Maple Leafs, Montreal Canadiens, Chicago Blackhawks, and Detroit Red Wings.

Who is the Bruins’ all-time leading scorer?

Have the Bruins won any Stanley Cups?

The Boston Bruins have won the Stanley Cup six times, taking home the title in 1929, 1939, 1941, 1970, 1972, and 2011. However, they have also lost the Stanley Cup a league-high 14 times, once more than the Detroit Red Wings. While they haven’t always been able to get the job done in the final, Boston has made the Stanley Cup final the fourth-most times, trailing Montreal, Detroit, and Toronto.

How many Bruins are in the Hockey Hall of Fame?

A remarkable 52 Bruins skaters have made the Hockey Hall of Fame, along with six members of the organization in the “builders” category. Most notable among the players are defensemen Bobby Orr, Ray Bourque, Eddie Shore, Brad Park, Adam Oates and Dit Clapper (though Clapper would at times play on the wing. Goaltenders Cecil “Tiny” Thompson, Frank Brimsek, Terry Sawchuk, Jacques Plante, Bernie Parent, and Gerry Cheevers all donned the Spoked B sweater, though Sawchuk, Plante, and Parent spent most of their careers with other franchises. Cam Neely, Phil Esposito, Johnny Bucyk, Jean Ratelle, and Bill Cowley highlight the forward group.

Where do the Bruins play their home games?

Boston plays their home games at the TD Garden in Boston, Mass. They’ve played at “The Garden” since the arena opened in 1995, replacing the previous facility, the Boston Garden, which opened in 1928. TD Garden also hosted the 1996 NHL All-Star Game.

Who celebrated with a dive after scoring the Stanley Cup winning goal in overtime in the 1970 Finals?

Bobby Orr’s incredible goal was made even more legendary with a celebration for the ages.

Which Boston players have had their jersey numbers retired by the team?