Two of the NHL’s hottest teams clash this Monday night as the Montreal Canadiens take on the Los Angeles Kings, at the Staples Center at 10:30 PM ET. 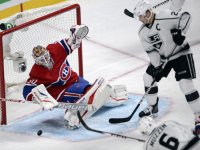 Taking into consideration the games before the Sochi Winter Olympics break, Montreal has won five of their last six games, including two in a row. They have done it with a tremendous offensive effort, scoring 10 goals over the last two games.

Goalkeeper Peter Budaj has had a tremendous stretch as well, despite the games have been high scoring affairs; he’s has taken Cayery Price’s job and turning into masterful performances night in and night out.

“He’s been unbelievable,” Canadiens left wing Max Pacioretty said of Budaj. “He’s kept us in all three games he’s played, and he’s made key saves at key moments. That’s probably the most important thing a goalie can do.”

Los Angeles has won four in a row, including victories over Columbus and Carolina at home and against Colorado and Calgary away from it.

“It’s no secret we weren’t happy with our game before the break started,” said defenseman Alec Martinez. “We worked on a lot of things, and we knew that when we came back, this would be crunch-time, playoff hockey.”