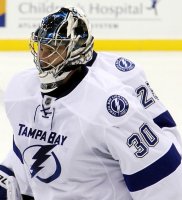 Oh, look at all that offensive firepower! Well I bet when the Tampa Bay Lightning (8-2, 3-1 road) and the Pittsburgh Penguins (8-3, 4-1 home) Eastern Conference finals gets underway tonight at the CONSOL Energy Center (8:00 PM Eastern), it’ll be high-scoring affair after high-scoring affair.

Too bad I would probably lose that bet. While the likes of Nikita Kucherov and Phil Kessel are hot coming into this one, no one is playing finer than these two netminders. Ben Bishop and Matt Murray lead all remaining goalies in save-percentage (.938 and .935, respectively) and they will be the focal point of Pittsburgh and Tampa’s first playoff series since 2011.

Back then, it was Dwayne Roloson stymieing Pittsburgh shooters as Tampa edged out Pittsburgh in seven games. That wasn’t the only major difference though: Sidney Crosby and Evgeni Malkin were both sidelined for that series with injuries. In fact, only four Penguins that played in that series will take part in this one.

The numbers are even lower for Tampa. If Steven Stamkos doesn’t return from injury, Victor Hedman will mark the only Lightning player left from their 2011 victory.

Yet the changes to these rosters have been almost exclusively for the better. For Pittsburgh, new additions this season like Kessel, Nick Bonino, Carl Hagelin, and Trevor Daley have been massive difference-makers in the first two rounds, combining for 36 points in 11 games.

Tampa’s success has come from their infusion of youth. Youngsters like Kucherov, Ordrej Palat, and Tyler Johnson carried this team to the Stanley Cup finals last year, and they’ve picked up right where they left off this time around.

But don’t pigeonhole these teams into the “strictly scoring” category because both of them have some bite. Tampa leads all playoff teams in penalty minutes, putting themselves down a man 43 times. Thanks to routinely shooting the puck over the glass, the Pens have found themselves shorthanded 42 times this postseason.

Needless to say, special teams will be a crucial battle in this series. Tampa has killed 88-percent of their penalties these playoffs, while the Penguins have iced 83-percent of them.

The teams have combined to play ten one-goal games in the first two rounds, so get ready for a lot of tight games and high drama in the coming days.

When it comes to betting, I like Tampa’s chances in the overall series. The Lightning have won four of the last five playoff series in which the other team has home-ice advantage. Coupled that with the experience advantage Bishop has over Murray in net, and the Bolts could easily pull off the upset.