After an unexpected loss against the Chicago Blackhawks on Thursday, the New York Rangers will have
some time to set things right as they host the Columbus Blue Jackets on Sunday, at 8 PM ET at Madison
Square Garden. 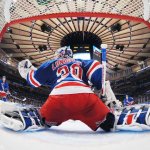 The 4-2 loss against Chicago was only their second one in eight games, but both losses were at the
Garden. “We had a great second half of the second,” Rangers captain Ryan Callahan said about the 0 for
7 on the power play situations. “In the third, we continued to pressure, but four goals is a tough lead to
come back from. Our second and third were good, but the first killed us”.

The Rangers, along with the Red Wings, are the most consistent teams in NHL. They both manage a good
combination of great defense, and scoring when they need to.

The Jackets arrive after winning 2-1 over St. Louis. “We played hard,” Derek Dorsett said. “We’ve just got
to make sure we play that way the rest of the season and show (everyone) that we do care. We want
to win as many games as possible. It doesn’t matter what’s at stake. If we have to be the spoilers, then
we’ll be the spoilers”.

Columbus and NY Rangers haven’t faced each other this season; this will be their first game and only
game in the series.

The Rangers are a better team in all facets of the game, with two days of rest you shouldn’t have a
problem picking them to win.