On June 20, Josh Emmett faces Shane Burgos in the co-main event of the UFC on ESPN 11 fight card. Emmett is the No. 8-ranked fighter in the official UFC featherweight rankings. Burgos checks in two spots below Emmett at No. 10 in the division.

Emmett is on a two-fight winning streak heading into this contest. Burgos has victories in his past three trips to the octagon.

UFC on ESPN 11 is headlined by a heavyweight matchup between Curtis Blaydes and Alexander Volkov.

This is an incredibly interesting fight. A win for either man could set him up for a matchup against a top-five opponent. At the same time, a loss could put either man in the position to become a gatekeeper and, with Emmett being 35, that status could mark the end of his upward trajectory. At 29, Burgos has much more time to get back in the mix should he suffer a loss in Las Vegas.

What gives Burgos the advantage is his output and his height and reach. I think if Emmett touches Burgos, it won’t be with a flush strike.

I believe Burgos gets the decision win, but he could tire out Emmett and score a late knockout.

This is an excellent question. Both men have faced about equal level of competition and both men have done well at the level they have been asked to compete at. With this matchup, it feels as if the UFC is looking for one of these featherweights to show they are ready for the top of the division.

Burgos is more well rounded and with his aggression, striking, height, reach, and his ability to handle himself on the ground, he is the man who has the edge in what should be a highly competitive scrap.

In 2017, Emmett knocked out Ricardo Lamas. That win earned him a matchup against Jeremy Stephens. Stephens crushed Emmett. The knockout loss left Emmett with multiple facial fractures. He missed more than a year of action. When he came back, he showed he was willing to do what was required in a fight. Emmett has scored two knockout wins since his loss to Stephens. 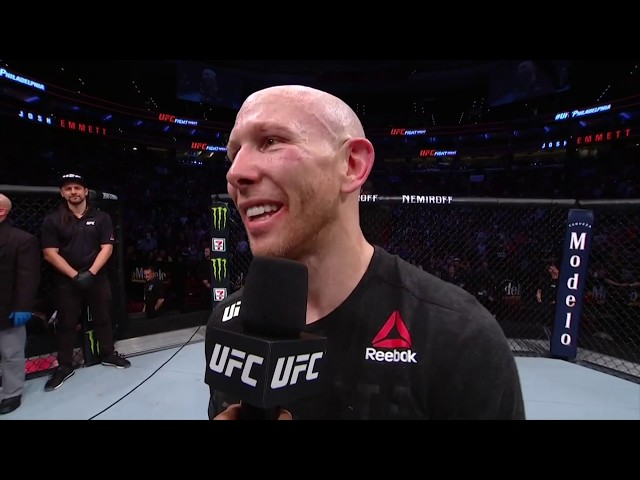 Burgos has one loss on his record, a 2018 TKO “Fight of the Night” setback to Calvin Kattar. Since that defeat, Burgos has earned three victories in three different manners. He has a submission, a decision, and most recently a knockout win.

As stated above, this feels like the type of matchup where the winner gets his big opportunity and the loser becomes a fighter who will be used as a test for other featherweights who want to break into the top of the 145-pound division.  Being a gatekeeper is not something to be ashamed of, but it’s also not the goal of many fighters. I expect Emmett and Burgos both want to be champions one day. The winner of this fight is likely to get that opportunity a lot sooner than the losing fighter.